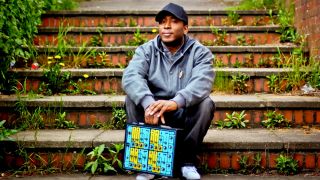 Marc Mac is a man of many guises. In addition to having a pivotal role in the development of DnB and broken beat as part of 4hero, he's also explored techno territory as Nu Era and hip-hop with his funky Visioneers act.

For his latest project he's revived the long-defunct Manix alias and turned the clock all the way back to 1992 for a full-on hardcore rave excursion.

We caught up with him to find out more about the new album, and how his approach to production has changed over the years.

A lot of artist who made their name in hardcore rave later turned their back on the scene. What inspired you to create a new album under the Manix pseudonym?

"You're right in a sense, there are a lot of artists who would say that they'd evolved and moved away from hardcore, but because that was our roots we've kept some of that with us all the time. There was always a breakbeat connection, even throughout the whole 4hero campaign or Visioneers or whatever, and we've somehow brought some of those Reinforced fans along with us."

Why do up you think Reinforced Records in particular has inspired such a devoted following among fans?

"There's supposed to be this new age now where artists are connecting with their fans, with social networking and everything that's happening now. But we always had that with Reinforced. Out studio was like a shoebox, and in that studio was a telephone.

"So in the middle of recording a Manix record or something, the phone would ring. It would be a fan or a record buyer asking us a question about a release. So that connected to the fans directly. That's always been something that's important to us.

"Also giving the fans something different as well, Reinforced being the first drum and bass label to have a picture discs series. We weren't always out there chasing the latest artists that were big or anything like that, we always nurtured and brought people through. They were ethics that kept us favourable with the fans I think."

This latest release also has an Enforcers-style picture disc, but is also released digitally through Bandcamp. What's the thinking behind that?

"It will eventually be on iTunes anyway, but again that was about the whole direct contact thing. The first record we put out, Mr Kirk's Nightmare, we sold from the back of our car. It was so direct you could hand over some cash and get the record out of the boot of a car!

"When thinking about doing the Manix album, I thought about how far I could go back to being in the original format of how we used to run the company. If someone buys it though Bandcamp they're getting it from us direct, you're not going through distributors and a shop or anybody else. It was going to be a limited amount pressing anyway, it really doesn't make any sense to try and hit a distributor with it, just come direct and get it from us."

With the new Manix album Living In The Past Marc revisits the hardcore sound of 20 years ago, when huge basslines, insane synths, and sped up breakbeats and vocals were the order of the day, and when Reinforced Records were putting out classic rave tracks like Hardcore Junglism.

The album is very true to the authentic Manix sound. What kit did you use to produce it?

"Half of the discs had bad data, but I could get breaks and some kits recorded out of it and into Logic. I suppose that's a process in itself, because the 950 has a sound that lends itself to that era naturally, it's got that warmth on the breaks."

Processing sounds in samplers was always a big part of the 4hero sound. Was that the S950 timestretching on tracks like Journey From The Light?

"Definitely. That 950 was so important to what we were doing back then. We made it our job to learn every single page in the sampler. Timestretching was something like page 20 in the menu, but we needed to know everything in the sampler so that's how we stumbled on it.

"The other thing about the 950, that a lot of people walked away from, was how it looped. We used to call it the infinite loop. If you looped a pad sound or a drum sound or anything it would have this alternating forward and backward loop. When the Akai S3000 and the other samplers came out, everybody jumped on those, and they'd lost the ability to do that kind of thing.

"We had a lot of people coming back to us and saying how are you making those sounds? It was simply because we didn't move quickly into the new technology, we wanted to master the old one first."

Was Journey From The Light the first track to use pitchshifted breakbeats?

"As far as we know that the first time, but there's an important factor to that. Goldie did Terminator, and what he did on that was pitchshifting through another device. I mean, it was a secret back in them days, but now we can say he was using the Eventide H3000 harmoniser.

"What we did was timestretching, so it wasn't like you had a lever like you had on the H3000, where you could turn it at any point and change and shift the break. We had to get the loop, shift it to one pitch, get the same loop, shift it to another pitch... So you might have had four versions of the same break timestretched to have a different sound. And then you'd have to piece that together in the track. It was a completely different method. So Goldie was the first in terms of that sound with pitchshifting, but the first time on record I can remember was Journey From The Light, which was using timestreching. "

Was the Students Of The Future remix the first rack to have timestreched vocal samples?

"Yeah, that was probably like an accident to be honest! With timestretching, if you're doing it completely wrong, you get that effect. There were about four or five different trademarks effects that we got from doing timestretching in a particular way. The sounds on that record sound like trumpets or horns or all sort of things, but it's basically the malfunctioning of the timestretching that gives you that effect."

Most DnB has moved away from that kind of experimentation now. Is that part of why we haven't seen more 4hero DnB tracks?

"Yeah it's definitely moved away from that. There was a point where we thought we'd actually taken things too far in terms of experimentation, because the Parallel Universe album was basically a complete flop. The DnB community was like, 'You're experimenting too much, we don't want to listen, we need to dance!' So it kind of backfired on us. If it wasn't for the NME making it their dance album of the year we probably wouldn't have made another 4hero record: we thought we probably just took it too far, people don't want to hear that kind of drum n bass.

"When we got that award it allowed the likes of Paul Martin and Gilles Peterson at Talking Loud and some of the industry types that would read the NME to actually know about 4hero. So the record flopped, but it still ended up being well noted in other areas apart from drum 'n' bass.

"So yeah, there was a point where we went too far and then people wanted it to be more dancefloor. To be honest though I've got to agree with that, you don't want to be on the dancefloor and be just hearing mad, crazy people experimenting. You wanna dance!"

As part of 4hero and Visioneers Marc has covered many classic song such as Les Fleur and Ike's Mood I, and remixed an eclectic range of artists from Courtney Pine and Pulp to Sonz Of a Loop Da Loop Era.

With 4hero and Visioneers you've remixed and covered some classic tracks. Why does reinterpretation have such an appeal for you?

"So when I take on those challenges it can be a lot harder to sound like the original than to, say, take a Rotary Connection tune and make a techno version of it! That technically will take me about half an hour. No disrespect to techno at all. But it would be far easier to do that than to get it to sound like it was recorded in 1971, then take it into the future by flipping it in into drum n bass. It's a lot harder to do that kind of thing than to do straight covers. I like the idea of exploring how things are recorded, I love the technology they used and the recording processes they used. I love that far more than I do the modern day processes."

How do you go about researching vintage recording techniques?

"Me, Dego and Ian from Reinforced were big record collectors. We used to spend hours and hours reading the backs of the records. You'd buy a Herbie Hancock record and it would say what kit he was using, what studio it was recorded in... Some of the jazz records went down to what mics they were using. Even the line-up, if you see there's four people in the brass section, and it's made up of saxaphone, trombone and two trumpets, that's giving you some clue of how to get that horn sound, you know what's in their arrangement.

"That's the unfortunate thing about the digital music - you've got nothing to go on! We were just fortunate that we had those records, and that the people that made those records knew how important that stuff was, otherwise they wouldn't have gone on and on about the equipment they were using!

"That was the first point of call in trying to get that sound. Looking at the old studios as well, and the equipment that we used in the old studios down to the valves and stuff. When we started to record the 4hero album Two Pages the first thing I did was buy a new drum kit. It had to be a particular drum kit, I did research into vintage Ludwig kits, and it had to be a 14" bass drum to get that particular sound. Both me and Dego were very particular and very meticulous with all that processing and recording."

Do you use many analogue emulation plugins?

"There's a company called Nomad that's making some really nice stuff that I like at the moment. In terms of equalisation, compression, valve and tape simulation they're very good. Slate Digital make some really good tape stuff as well. Waves have always made some really good stuff, sometimes it can be a little bit hard, but that depends on what track I'm using it on. If it's more of a dance or electronic track, Waves compression and EQ are great. If it's more analogue like Visioneers or 4hero, I'll use something like the Nomad stuff.

"What's great about this technology is that you get some university kid that'll just make some synth or something, and they give it you free, because they're just trying something out. Then all of a sudden you've got this synthesiser with a great sound that you never would have found in any physical product. So I think the digital world is great for experimenting."

The new Manix album Living In The Past is available now, and you can also follow Marc on Twitter.