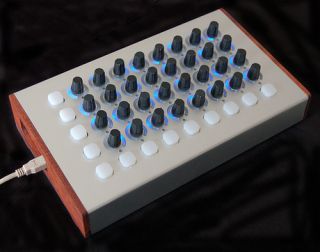 When is a secret not a secret? When everybody knows about it, that's when, and so it is with Livid Instruments' Code, the 'secret' new MIDI controller that was revealed via the decidedly public platforms of Twitter and flickr a few hours ago.

By the looks of things, this has 32 encoders, 13 buttons, MIDI I/O and a USB connection. We're guessing that it's designed serve as a companion to Livid's Block, a grid-based controller, though obviously, it'll be usable on its own, too.

More details when we get them - there are more pics on Livid's flickr page.