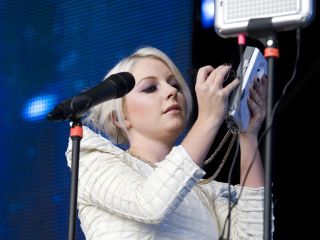 Little Boots plays a Stylophone on stage: will she soon have a laser harp, too? (Image credit: © Kirsty Umback/Corbis)

Having spent the majority of 2009 concentrating on being a Pop Star, it seems that Little Boots has returned to her techy roots by building a laser harp and releasing an iPhone app.

The laser harp, which was made famous by Jean Michel Jarre, enables you to make music by 'blocking' beams with your hands. Little Boots (AKA Victoria Hesketh) has posted a trailer (you can watch it below) for what she describes as her 'laser harp adventure' on YouTube.

If you want to watch the full two-part documentary you'll have to sign up as a member at the Little Boots website.

The iPhone app goes by the name of the Little Boots Reactive Remixer (video tutorial below) and enables you to remix three of her songs: Meddle, New In Town and Remedy. Each track has its own 'scene', and each of these works slightly differently.

The Little Boots Reactive Remixer costs £1.79 and is available now from the Apple App Store.