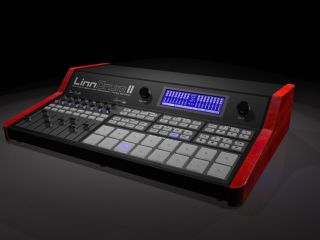 How the LinnDrum II won't look.

Roger Linn has taken the unusual step of releasing images of the LinnDrum II groovebox that he's developing with Dave Smith - but only to show what the finished product won't look like.

Confused? MusicRadar was a little perplexed, too, but it turns out that not only has the design that was showcased at the 2008 Winter NAMM show been ditched, but a further revision (which was actually the third) has also gone into the trash folder.

All of which leaves us where exactly? Perhaps we should let Roger Linn explain.

"I'm sorry to report that we won't be shipping in 2008 and I can't yet offer a new estimated ship date. The good news is that [LinnDrum II] has turned into a significantly more powerful and creative product. The bad news is that we'd prefer not to release details of the new design because it's so cool that I don't want to show our cards to the competition."

That sounds fair enough - what we're looking at here could be a turbo-charged version of the products in Akai's MPC range, which Linn was actually responsible for creating back in the day.

The LinnDrum II is now being billed as a 'Beat-Centric Digital Audio Workstation with Integrated Analog Synthesis' - we'll just have to wait and see what it actually ends up looking like.