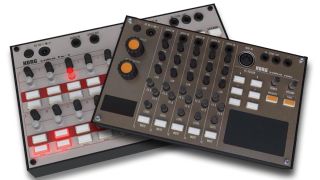 A purportedly leaked image of what looks to be the Korg Volca Mix - a five-channel mini-mixer and FX unit designed in the now familiar Volca style - emerged on an unofficial Korg Volca group Facebook page this weekend.

However, despite the hopes of many commentators - MusicRadar included - that Korg is putting these units into production, we have confirmation from the Japanese giant that the image is indeed fake.

It certainly looks genuine enough with the undeniably Volca-esque pots, buttons and livery. Also included are two assignable effects and a Kaoss pad - just the things for existing Volca users.

The addition of five inputs also had us to believing that there could be more to come from the Volca range, which includes the Volca Bass, Volca Keys, Volca Beats and Volca Sample. Either that or the mock-up's creator is counting the littleBits Korg kits as part of the family.

Further digging on the unofficial Korg Volca group Facebook page soon had us follow a trail of breadcrumbs back to a certain Chris Johannes who claims he had the idea for the Volca Mix and another module known as the Volca FS-1; a 16-step-sequenced filter featuring high and low pass filter settings, with cut-off and resonance controls per step.

Much like the Volca Mix, the FS-1 looks to be authentic and certainly would fit within the Volca ecosystem.

There is no doubting that both renders are exquisitely executed, but we would be clutching at straws if we thought this could all be a ruse by Korg to whet our appetites for an upcoming announcement. Still, we can dream, can't we?