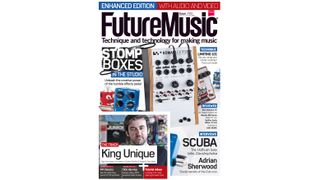 When we talk about studio hardware, it generally conjures up images of things like synths and drum machines, or racks of outboard effects processors. But there's another type of hardware effect that, though widely used, rarely seems to be discussed in production circles - the humble effects pedal.

Sure, being generally designed with axe-wielders in mind, stomp boxes often lack the flexibility or practical features of dedicated studio effects, but there's a ton of advantages to them too. For one thing, they're cheap and readily available. Their compact nature can encourage a modular route to creating multi-effects too, leading to plenty of experimentation and often producing totally unique results. That's why we've dedicated this month's cover feature to stomp boxes. Pick up the mag now and get connecting.

Beat Loops - Learn how to layer whole beats together for creative, funky results

Limiting 101 - How to use limiting for professional results

Producer's Guide To... UAD Apollo Expanded: Part 2 - Discover how to get the most out of Universal Audio's Apollo range for recording and tracking

Adrian Sherwood - We catch up with the dub legend to talk gear, On-U Sound and his new collaborative album with Pinch

The Track: King Unique - The House and Techno veteran dissects his remix of Javier Portilla and Sotela's Your Eyes

We test Din Sync's DR-110-inspired DrumDokta2 and get sequencing with clock dividers.