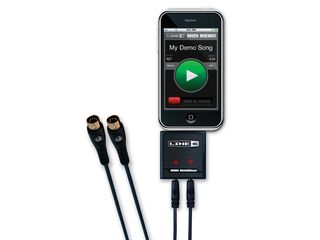 The list of MIDI Mobilizer-compatible music making apps may soon start to grow.

Line 6's MIDI Mobilizer is a neat little iPhone/iPod touch/iPad MIDI interface, but thus far, the problem has been that not many music making apps support it.

The company is hoping to rectify this situation, however, by making its MIDI Mobilizer SDK available free to all app developers.

"With Apple's new iOS 4 it is now possible for any developer to create MIDI-enabled applications that work with MIDI Mobilizer," explains Marcus Ryle, SVP of New Business Development at Line 6.

"As an open invitation to developers, we are now providing the SDK at no charge, and are not charging any license fee or royalty."

Hopefully, this should kickstart the development of MIDI-capable iOS apps - requests for the SDK should be sent to MMdeveloper@line6.com.