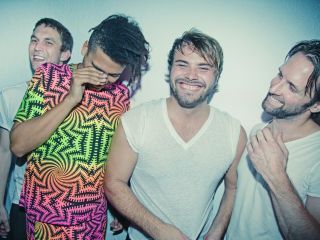 We caught up with one half of Visionquest, Ryan Crosson (left) and Seth Troxler (right), before their incredible 10 hour set at the Village Underground in East London last week.

With a new focus on the Visionquest label, Troxler's skyrocketing DJ status and Crosson's plan to move permanently to London to set up his studio, it's a busy 2012 for the Detroit collective.

So you all met in Detroit?

Ryan Crosson: "Yeah, we all came together from different places surrounding Detroit."

Seth Troxler: "Yeah, Ryan was actually my first customer at the record store. We all met at record stores and raves."

RC: "Well, it was sort of at the same time as we were learning from this crew of DJs called Beretta Music and these guys Brian Kage and Luke Hess showed us Reason and Ableton basics to get us going."

ST: "I remember that Ryan started pushing me to move on these ideas."

Did you get into a competitive situation with each other?

RC: "Of course, but it's cool, it helps you push each other for better and better stuff. It's the same when DJing, if someone plays a cool track then you want to play a better track. It still happens now with production tricks too. If Seth learns a new trick then I need to know it too so I can apply the same thing in my own way and vice versa.

"Even before we became Visionquest and were just doing our own solo stuff, we used to listen to all this amazing music in my basement and try and figure out what made these tracks so awesome. We had all these names for the elements that seemed to go into these tracks. Like they had to have the 'dust under the rug' sound and 'slap your girlfriend drums' and..."

So were these preset sounds and such?

RC: "No, they were more like ideas. So 'cool chords' were the main hook and the 'LA pad' was like the transition."

ST: "Yeah that could either be like the Sunset Strip and you living all your dreams or the dark boulevard of broken dreams."

So you broke elements of tracks down into micro-narratives?

RC: "Yeah, it was a way to give adjectives to all these moments in the music that we heard in other people's tracks."

ST: "So, 'the rug' was a reference to The Big Lebowski as it was a musical element that tied the rest of the track together."

RC: "We didn't know our head from our ass at that point when it came to music production so it was a way to join all these dots."

ST: "It was years ago now, but I think we had like seven elements and we'd always be like, 'damn, we're missing the LA pad'."

ST: "Yeah, I mean we were more influenced by the European sound of people like Richie Hawtin than the older Detroit guys. I think it's our attitude that is more Detroit than our music."

Do you play or are you programmers?

RC: "Lee is the most musical of the group. But really it's just programming most of the time, or editing little moments."

ST: "Trial and error man, I mean I have brief moments of genius when I'm playing keyboards that I can never repeat!" [Laughs]

So right now, Visionquest is a DJ group. Are there plans to make a full electronic live show?

RC: "Yes, but I think in the past we've been held back because we've thought too big, too soon instead of taking baby steps towards a show. I feel like we need to add analogue gear and have the Visionquest show as an environment. We've been thinking this sort of tunnel; or a worm hole."

ST: "Just something that is new and has its own environment and can make the impact that we want. Everyone can be a DJ and even be a DJ with some visuals behind them from a projector, so it's really necessary to step up further."

RC: "People need to walk out of a show and be like 'what the fuck just happened!' you know?"

So run us through some of the Visonquest studio gear?

RC: "Well the essentials are the SE1X, the Jupiter-8 and the Harmonizer. Lee and I live and die by the Roland Juno synth. Ableton is our main guy for software, but we also like Waves and the Soundtoys plug-ins. We have Maschine for a bit of drums too."

ST: "I have just bought the Dave Smith Tempest too."

SC: "I haven't had chance to even open it yet, it's still in the packaging at home. The Linn Drum is my favourite drum machine of all time so I had to try one of these."

RC: "I really want to get the Rhizome thing, but I haven't had chance to trial it yet."

ST: "We used to use the PSP plug-ins a lot but not so much any more."

How would you describe everyone's functions in the group?

RC: "Well I guess Lee is the most musical so he often comes with the melodies, but because of the music side he can sometimes follow the rules too much.

"I'm very good at building blocks and putting in those layers that sort of suck everything together."

ST: "A lot of the time I get the deals and bring in the remixes. But Ryan and Lee are the real super-technical guys. I'm not the most technical guy really.

"Shaun is really good at sequencing things up and has a real knack for knowing when things need to happen and Seth has that too."

RC: "With Seth, he brings a lot of intangibles and I think he still is a dreamer and brings these magnificent, vivacious and colourful ideas to the table. His ideas are wide and encompassing and Lee and I might go in and tighten things up. But overall it's pretty difficult to say who's doing what on a regular basis as it never works like that."

ST: "I just don't get to be in the studio that much any more so I need to get back to it. But two years ago when my DJ career really took off it meant that I didn't have so much time in the studio. Ryan is in the studio every day where as I'm in there maybe once a month."

Isn't your production work like a flyer for your DJ gigs though?

ST: "I think at first it was but then it gets to a certain point where it's less important. I'm a DJ who makes songs occasionally. Plus, life happens too."

So there is a lot of pressure to keep up with lots of gigs and productions?

ST: "Yeah, you hear people saying; 'what happened to this producer or this DJ?' Then it turns out they got married or had kids - y'know, life stuff. You have to do actual life stuff too."

ST: "We've been putting so much into the label at the moment. Ee've got a great new album from this band Footprintz who are crazy studio rats. We'll be doing a few label concept parties this summer and our own solo stuff."

RC: "We've got some stuff lined up at DC10 in Ibiza this summer and yeah, the main focus is the Visionquest label."