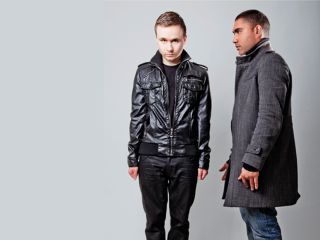 Dirty house dons NAPT (aka Tomek Naden and Ashley Pope) have been kicking ass in the breaks and electro arenas for nearly a decade now. Their tunes are born out of a close friendship that has seen them creating tunes since they were teenagers.

"We went to the same school, and we were both making music. In our gap year we decided to start making music together… because we love each other so much," laughs Ashley. Tomek has some more detail to give us."This would have been about 2000 - we were making house and garage," he adds. "Ashley was on Notator, and I was using FastTracker, which looked like something out of The Matrix, with green numbers streaming down the screen!"

The pair soon began releasing house tracks under various pseudonyms, and as the nu-skool breakbeat scene gained popularity, their sound became more breaks-oriented. This wasn't their final musical destination, however. "I think we came from a very different place to a lot of people that made breaks," explains Ashley. "So even though we were lucky enough to do quite well in that area, we were never that core breaks sound - we were always on the outside."

NAPT's current sound is all about wobbly electro house. "We carried across our sound into what we're doing now," says Ashley. "We're just exploring different beat patterns, building on what we've done and exploring new avenues… But we're still coming from the same place in terms of the influence."

"With the stuff we've been doing on the label [NAPT's Red Sugar Records], we've definitely explored some different routes!" Tomek chimes in. "We've been doing more club-based material, always trying to keep it sounding quite breakbeat without it necessarily sounding like breaks. We've always been interested in using rare grooves and odd beat placements and stuff. We've put out some tunes that are quite odd, but this track King Jitter is quite straight-laced!"

Over the past few years, the dance music scene has become less segregated and more open-minded. Is this a positive change for an act that lies on the fringes of genres?
"This has been the most exciting time for us," agrees Tomek. "We've always enjoyed music that's been in between genres - that's always been something that we've kind of aimed for. That's a good thing in that you try to create something that's more original, but it's then hard to get placed and you end up falling through the cracks.

"This is a great time for us because we've had support for our more four-to-the-floor electro stuff, and we've done a lot of very stripped-back sub-bass house stuff that's picked up some great support. Our 140bpm essential dubstep stuff with Lucien X has had support from Skream, and we've had support from Dillon Francis for our moombahton. "It's about getting a sound and being able to translate it into different genres and tempos. Now is the perfect time to do that, so when we go out and play sets, we play a range of tempos from 110bpm to DnB!"