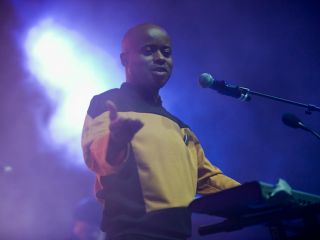 Juan Atkins fused electronics, analogue synths and dance music to forge Detroit house, a sound which resonated outward to the rest of the world.

Soon Atkins, was tiring of the restrictions of other people's tunes - so, armed with a Korg MS-10, a mixer and a couple of cassette decks, he set out on a sonic adventure that led to the 1982 track Clear, one of the earliest examples of techno. Since then he has used numerous monikers: Infiniti, Cybotron and the one he uses today, Model 500. We catch up with the techno legend to hear about making music history.

What kind of gear were you using when you did your seminal Cybotron track, Clear, at the beginning of the 1980s?
"Well, I wasn't using no software! We were using a Korg SQD1 [Korg's groundbreaking MIDI recorder/sequencer], then I moved on to the Roland MC-500, one of their MicroComposers. That was a really good sequencer.

"Back then I was also using a Sequential Pro-One keyboard, a Roland RS-09 string synth, an ARP Odyssey and an ARP Axxe. And I had a Boss DR-55 and then an 808, obviously, when they first came out."

Was going out live with that kind of setup a bit of a nightmare?
"Actually, it was fun using that gear - hard but fun. At the time everything was experimental to a certain degree, and the way the synths and keyboards were set up at that point was not particularly musician-friendly. The Korg MS10 was incredible for weird, UFO-type sounds and effects. It was just a monophonic keyboard, so you couldn't even play chords on it. I would sit for hours on that MS10 just making sounds… I had a great time."

"The advent of MIDI was a real godsend because it enabled different manufacturers' devices to talk to one another. It was great for us because we didn't necessarily want to use Roland keyboards just because we had a Roland drum machine. We might want to use Korg or Oberheim, and before MIDI, a lot of that stuff wouldn't work together. After that, digital sampling opened up the whole industry."

Did you sample a lot in the early years?
"I'm not a fan of somebody just straight ripping off somebody else's track via sampling. There are a lot of innovative ways that the sampler came to be used - it brought an awful lot of sounds to fruition that you wouldn't otherwise have been able to hear.

"The very first samplers were those pedal-type ones that only gave you a tiny snippet of time to sample with, but it was still cool to be able to take your voice and play it over the keyboard. If you only had a couple of seconds' sample time, though, how much could you really do?"

"The sampler I really liked using in my studio was the Emu E64. I could almost use it as a recorder. It was great for doing remixes because you could take a whole vocal track and load it into the sampler, then fly it into your track. That made doing mixes a lot easier."

What about digital?
"We liked digital because it presented a new sound. I'm always looking for something fresh, and when Yamaha came out with the DX7, which I think was the first fully programmable digital synth, the sounds were amazing. They had those ring modulators and ring sounds - the ring-modulating overtones and undertones that the DX7 provided, no other keyboard had."

"The digital keyboards were a nightmare to program, but if you were just starting out programming synths, the DX7 was like your first bicycle. You could get really good at it. The digital hybrids that came along, like the EMU Morpheus, had some great sounds - really way-out and spacey. Sometimes new machines have sounds that are so unconventional that people are scared to use them."

Do you like the journey techno/house has taken since those early Detroit days?
"It's certainly had an interesting lifespan, I guess you could say. The thing about it is that I don't think people realise how far advanced the sound actually was. I mean, everybody heard it, they liked it, it had its spin offs and progressions - yet somehow it always comes back to Detroit. Even the minimal stuff now is a sort of take back to Detroit."

So you think the minimal scene is the sound of techno returning to its roots?
"Yeah, I think it's good. All of the progressions have had great moments within them. Likewise, there's always things within each progression that make you ask, 'Why did this direction even come about?' I think a lot of the people who are making music are in it just for the art of making music. You know, you don't want to go out and invest in all that gear just to push a couple of preset buttons and make a track that 20 people across the world could have already made."

You've always had a reputation for innovation. Is that still important to you?
"I think the synthesiser has opened the door for new approaches to things, so why limit yourself when you have the ability to do things that nobody else has done?

"I always feel it's better to use a drum loop or track that I created rather than somebody else's. Keyboards got so advanced that the presets started to prevail, then people started wanting more programmable synths again. I remember when the Roland JD-800 came out - it was a digital keyboard, but with easy-to-use faders."

If you had to pick a favourite bit of gear from over the years, what would it be?
"That would have to be the Roland DR-55 drum machine. It was the most quantum innovation that ever happened. If I had to pick one machine, that would be it. Being able to program a drum machine was a huge thing."

Do you miss the innocence or the simplicity of early house?
"Hey - you gotta move on, man. Progression and the future are always gonna happen. So, of course, I've been around for a while, but how would I sound if I kept going on about 'back in the day'? That's what my grandfather sounds like! The good old days are gone.

"You just got to keep looking at all this stuff through a kid's eyes - that is, I approach any new development with an open mind, which is the only way you can really do it because it's gonna happen anyway. Either you're part of the curve or you're gonna get run over by the curve!"

For the latest on Juan Atkins and his Model 500 work, check out myspace.com/model500