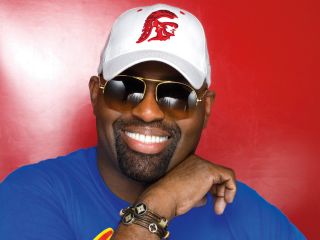 Frankie Knuckles helped define the then-revolutionary sound of electronic dance music in the 80s, thanks to marathon, hand-crafted, drum machine-assisted sets at Chicago's Warehouse and later his own club, the PowerPlant. The Warehouse, of course, lent its name to house music itself, and Knuckles' illustrious career has earned him the title of Godfather of House.

After years of playing other people's records, Knuckles ventured into the studio to produce a string of influential club (and occasionally chart) hits like Tears, Baby Wants To Ride,The Whistle Song and the much-covered Your Love. "Did we know we were inventing a new kind of music? Of course we didn't!" he laughs. "We were just kids messing around in the studio. Somebody gives you a drum machine and you think, 'OK, I have no idea what this is, but let's see what kind of noise it makes.' There was no big plan."

Are you really the man responsible for the term 'house music'?
"That's what they tell me. I was driving past a shop inChicago and I saw a sign that said, "We play house music". I said to my friend, "What the hell is house music?" He said, "It's the kind of music you play at the Warehouse." I know there are other people who claim they came up with the name, but that's a true story and that's how I see it. Obviously, the idea we have of house music today is very different to the idea I had when I was DJing at the Warehouse. Back then, house was the music you heard at a great house party - a party at your friend's house. A bit of soul, funk… a bit of rock and classical. It was about opening your mind to all the music that was out there.

These days, dance music is a multi-national, multimillion- dollar industry. What was it like when you first started DJing back in 1972?
"Obviously, there was a club scene - places like the Continental Baths and the Gallery - but it was all happening underground. The mainstream wasn't interested. I mean, back in 1972, you didn't even have disco. You didn't have the 12-inch single. The early 70s scene in the US was being driven by the bands coming out of Philadelphia, as well as producers like Nick Ashford and Valerie Simpson.

"Nowadays everyone wants to be a DJ, but back then the idea of doing it to become a superstar was kinda weird. I didn't become a DJ because I wanted to be famous and make money.I did it because it was a job. All I did was play records - I had no access to things like studios or music equipment. The idea of making my own music never even crossed my mind. I was studying fashion at the time, and that's where I thought my future lay. I didn't see myself as a musician or a producer. To be honest, I didn't even own that many records. When I got offered my first DJ job at the Continental Baths, I had to borrow them. Up until that point, all I'd ever done was sit in the DJ booth!"

But you started making your own club edits on a reel-to-reel tape machine.
"Yeah. That probably started around the late 70s or early 80s. I'd been DJing for the best part of ten years by then, so I knew what worked on the dancefloor. I knew which bits of a song worked. I instinctively knew if the intro needed cutting or extending. My imagination was already doing its thing. I got hold of a quarter-inch Pioneer reel-to-reel machine, and that's what I used to do all my edits.

"And when I say 'edits', I really do mean edits, in the old-fashioned sense: cutting up little bits of tape and sticking them back together to make a new song. Like when I saw the video for Michael Jackson's Thriller on TV, I thought, 'Damn! That's the version I should be playing at the club.' I wanted that whole stripped-down section where the zombies do the dance. So I sat there with my reel-to-reel and started making copies of the relevant bits of music from the original song. I had a rough tape copy of the video version and worked out every bit I needed to recreate that zombie dance backing track.

"In the end, I had a gazillion little bits of tape - some no more than half a second of sound - all stuck together. You know something? It worked! I pieced it all together and I had my two-and-a-half-minute breakdown. And it was perfect - even if I'd been just a few milliseconds out with one of those edits, it would have thrown the whole thing. I was a master of rhythm. A master of editing. I was so on top of the reel-to-reel. Once I'd worked out where the playback head was in relation to the beat, I'd rock the tape backwards and forwards and know instinctively where to cut. I was making my own 12-inch mixes - the ones I knew were going to work when I played them out live!"

You started playing a drum machine alongside records, too. How did that happen?
"It wasn't really a drum machine. It was just one of those rhythm boxes that you get on home organs. Y'know… a boom-chikka box. I got the idea because there was always a metronome sitting in the DJ booth at the Warehouse. I never really understood the metronome, but I eventually started messing around with it and used to have it running while I was DJing - it would be tick-tocking just in the periphery of my vision. Eventually I started locking into this thing- locking the tunes and the metronome together, understanding the idea of beats per minute and the number of bars."

"One day my friend gave me this Rhythm Maker box, and I had it plugged into the auxiliary inputs of the mixer. It sounded great. The crowd loved it, and it was very handy if you had a problem with a record or one of the decks. You'd just fade up the Rhythm Maker and people would carry on dancing.

And then came the 909…
"That was a few years later - I'd say 84 or 85. Derrick May and his friends would come down to my new club, the Power Plant. One night he was carrying a bag, and inside was something wrapped in a towel. I asked him what it was and he just said, "Oh, I got you something very special - but you got to wait till the end of the night."

"After I finished my set - which was about 11am the next day - we went into the booth and he pulled out a box with some buttons on it. I said, 'Wow! That looks great, but what the hell is it?' Derricksaid, 'This is a Roland 909 drum machine, and it's going to take us to the future. It will be the foundation of music for the next 10 years.'"

"I took this thing home, sat in my room and started playing with it. He was right. It did point to the future. After a few days programming, I took it into the club and wired it up to the mixer. Let me tell you, every record I played that night had a 909 running underneath it. I loved that machine! Sometimes I'd just leave it running by itself, just so I could hear those kick drums. I think the crowd were pretty much sick of it by the end of the night, but I couldn't get enough. It just made sense to me."

When was the first time you went into a recording studio?
"I'd done a reel-to-reel edit of First Choice's Let No Man Put Asunder and a friend of mine got in touch with the record company and told them I should do the official remix. It was scary, but in many ways it was just the same as what I'd been doing at home. The only difference was that I was working on a fancy Revox tape machine instead of my little Pioneer."

Tell us about the making of Your Love
"I first heard Your Love a long, long time before it was released - a couple of years at least. Jamie Principle had a rough version on cassette, but straight away you could tell it was a special song. As always when I was working with Jamie, it was about finding the heart of the song - the bits that were going to hit the dancefloor."

"By the time we came to record it for real, all the bits were there. Actually, it was a very simple song… just four tracks. The drums were all on one track, the vocals on another track and then two tracks of keyboards. I think that was it. The drums were live drums on the early demo versions, but later on we added the kick from the 909. I think the arpeggiated synth was a Korg keyboard.

"The sad thing is that Jamie didn't get the recognition for that song. That song was his. He wrote it. There was a publishing deal done very early on, and Jamie hardly got a penny. That was one of the reasons I wanted to re record it and update it - to give people a chance to hear it again and to make sure the world knew Jamie was the man behind it."

Did you have any kind of setup at home?
"Are you kidding? I had the 909 and that was it! I'd hooked up with Jamie Principle, [writer of and vocalist on Your Love] by then, and he had all the equipment - drums, guitars and keyboards, all that stuff. He was really into Prince. He wanted to be the master of everything in the studio. The only problem was that Jamie's songs were like books - he didn't know how to edit himself. That's where I came in. I could tell that his songs were good, and my job was to think about how we could make them work on the dancefloor."

Do you use computers today? And do they make your job easier?
"From a creative point of view, the computer is a very convenient tool, but I don't like to rely on it. Even when I'm working on a computer, I rely on my ears. The computer might be telling me that the beat finishes here, but I'll listen and think, 'No, it finishes here.' The digital world is too clean and too set in stone - there are too many rules. I miss analogue. I miss tape. I miss those other people in the room. Even though I work in the digital realm now, I find that I end up spending a lot of time just trying to muddy the waters and make things sound more analogue."