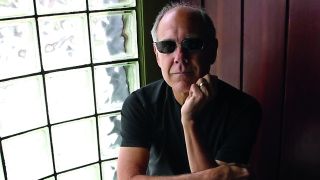 To call Dave Smith an icon of the synthesizer industry would be something of an understatement. Trained in computer science and electronic engineering, he began his career in music with the founding of Sequential Circuits in the mid-'70s, launching the iconic - and hugely influential - Prophet 5.

In the early '80s, working alongside a handful of other designers, including Tom Oberheim and the teams at Roland, Yamaha and Korg, Smith was instrumental in the creation of MIDI, which still remains the standard for communication between electronic instruments today. The mid-'90s, meanwhile, saw him take over the helm of software company Seer Systems, resulting in the creation of one of the first ever software synths.

Since 2001, Smith has been running his own hardware company, Dave Smith Instruments (DSI), run by a relatively small team in San Francisco's North Beach neighbourhood. With the release of his first modular unit just last summer - the DSM01 Curtis Filter - it's clear that Dave Smith has no intention of merely living off his legacy. We're certainly excited to see what projects he's got up his sleeves for 2015...

See more in Future Music 288, the Synth Issue, which is on sale now.

The use of DCOs alongside 'true' analogue circuits has become one of the defining features of DSI synths. What, for you, is the main advantage of using DCOs? Do you still meet any resistance from vintage purists who'd rather things be '100% analogue'?

"A DCO has the advantage of stability; it does not drift like VCOs do. You can make it as accurate or inaccurate as you want since we always include a 'slop' control."

Despite being a bigger name in the industry, you've kept DSI as a relatively small, localised operation. What benefits does this have?

"We move quickly, and can do whatever we want! We do not have a big infrastructure to support, so decisions are not made for business reasons, but rather based on what cool instrument we want to develop next."

Almost 20 years on from your stint developing soft synths with Seer Systems, would you ever consider returning to the realm of software synth development?

"I have no interest in developing soft synths. While they usually sound good, and they're cheap, and it's nice to be in the box, they simply don't have the sound and personality of a 'real' instrument that you can touch and hold. Synths are made to interact with, and knobs are much better than dragging a mouse on a monitor!"

How close a relationship do you have with the musicians that use your instruments? Does their feedback influence the design process?

"We talk to a lot of players to get feedback on our synths. We don't specifically get input on new products we're developing, but we take previous suggestions into account. We do not make custom versions; we'd rather spend the time on new designs!"

You released your first modular offering over the summer (the DSM01). What was the inspiration behind that?

"It was something new and fun to do. We do plan on some future modules; in fact we now have the DSM02 Character module, which takes the Character section from the Prophet 12 and Pro 2 and puts it into a module."

Given the recent popularity of 'affordable analogue' instruments and recreations of vintage synths, do you think there's less of a market for innovative hardware instruments now than there was in the '80s and '90s?

"There's plenty of innovation that can be done within the scope of analogue synthesis. We always try new approaches in our new designs to keep it fresh and interesting."

Would you ever consider going down the road of recreating one of your classic Sequential Circuits synths, in the way Korg have with the MS-20?

"Exact copies seem pointless, since it's already been done. But, the idea of creating an instrument inspired by a classic design can be interesting, as long as it's different. Stay tuned!"

Your collaboration with Roger Linn on the Tempest was a huge success. Would you consider joining forces once again?

"No specific plans at the moment, but some time in the future it would be fun to try something new."

Aside from your own achievements, what other instruments or music tech innovations have stood out as particularly impressive or inspirational to you over the years?

"Nothing specific, but what's really cool now is that there are so many instruments out there - analogue, digital, and software - and most of them sound good.

"Of course I'm partial to our synthesizers, but it's a great time to be a synth player with so much to choose from!"