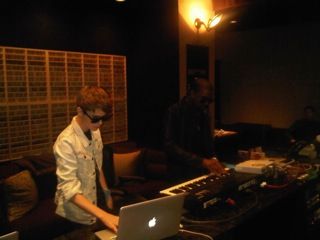 It seems like the most unlikely of match-ups, but Kanye West has tweeted a picture of himself seemingly at work in the studio with Justin Bieber, referring to him as "My new beat protégé".

While Kanye plays a bassline on his keyboard (possibly), Justin knocks up a beat in an unknown piece of music software on his MacBook Pro (maybe).

Whether this will result in some sort of official collaboration remains to be seen. West has already remixed Bieber's Runaway Love for his Never Say Never - The Remixes album, so maybe the notion isn't as fanciful as you might think.

The big unanswered question, of course, is what Kanye thinks of Justin's new haircut?