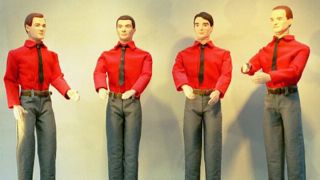 The sample was taken from Kraftwerk's 1977 track Metal On Metal, which featured on the album Trans-Europe Express, and used on Nur Mir (Only Me) by Sabrina Setlur.

Fast-forward to 2012 and the Federal Constitutional Court of Germany ruled in favour of Hütter, stipulating that Nur Mir (Only Me) could no longer be promoted as it infringed copyright.

The defence appealed the decision, and now Germany's high court has reversed the ruling in favour of Pelham. It believes that blocking Pelham's sample would "practically exclude the creation of pieces of music in a particular style".

However, this is not the first time a court has ruled in favour of the hip-hop producer, as the Constitutional Court had originally overturned the decision back in 2008.

The sample in question can be heard from 0:36 of Metal On Metal and is used throughout Setlur's track.

It remains to be seen what the consequences of this ruling will be; perhaps this is still not the end of the matter. And if you think evading copyright law is your only worry when cutting up the beats of others, then think again and check out our8 dumb things you need to stop doing when you're sampling. Otherwise you might end up in our list of the10 best and worst sampled tunes ever...