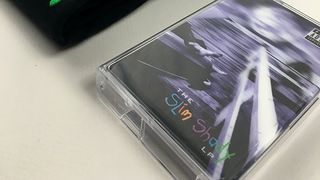 Here's hoping your deck doesn't chew it up.

It had to happen. With the vinyl revival extending to supermarkets these days, hipsters need a new old-school listening format du jour. And, if Eminem has his way, that format might just be the humble cassette.

The Detroit MC has announced on Twitter that his 1999 breakthrough album The Slim Shady LP will be reissued on a tape that that's all ready to slot into the Walkman that you no longer own. This forms part of a $40 bundle that can be pre-ordered now; it comprises a purple cassette with 3D motion printed cover, and a special edition Slim Shady T-shirt.

Of course, many of us cut our home recording teeth on cassette-based 4-track recorders, though we can't honestly say that we'd like to go back to them.

That said, if Eminem's move means that today's kids become versed in the ways of auto reverse and blank seek, we're all for it.