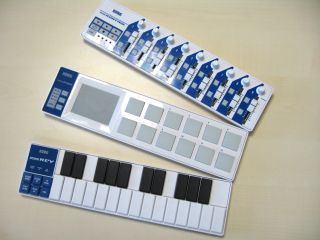 Three of a kind: which nanoSeries device is right for you?

Korg's nanoSeries controllers have been the talk of the computer-music-making town since their announcement in June, and MusicRadar has taken delivery of the first complete set to enter the UK. This comprises the nanoKey, the nanoPad and the nanoKontrol.

Each controller comes in a slim cardboard box with a hook at the top for hanging on a rail.

This gives their packaging a vaguely toy-like appearance - so are these playthings or serious performance tools?

Well, let's give you the good news first: the nanoSeries devices are certainly small. They're all incredibly slim, and each one measures just 320mm across. Here are a couple of comparison shots.

And of course, as the original press photo indicated, any one of these controllers - they all connect via a mini USB port, by the way - would sit very comfortably in front of your Apple MacBook.

Enough about the looks, though - how do these things actually feel?

Sadly, our first impression of the nanoKey is less than favourable. The keys feel more like those of the QWERTY variety than anything else (there's not a great deal of travel) and the fact that the black keys are the same size as the white ones makes forming chords very difficult.

With practice, we might get the hang of playing it better, but we suspect that the nanoKey will be best suited to the recording of simple monophonic bass or lead lines. We don't anticipate that it'll be used much on stage, either.

The nanoPad and nanoKontrol seem more practical; the pads on the former feel far superior to the keys on the nanoKey, while the X/Y pad is a useful addition. In fact, the nanoPad feels very much like the credible baby brother of Korg's highly-rated padKontrol.

The nanoKontrol isn't quite as slick - the faders are short and decidedly plasticky - but the knobs are smooth enough. The inclusion of transport controls suggests that this could turn out to be a decent portable DAW controller.

We'll have more on the nanoSeries controllers once we've had chance to give them a thorough going over. The nanoKey will cost £49, with the nanoKontrol and nanoPad retailing for £59 each. They should all be available in October.