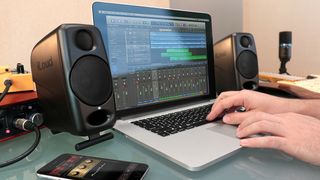 Slinging a laptop, audio interface and MIDI controller into a backpack is easy, but a pair of monitors as well? You might be stretching things - not least your bag's zip and fabric - to fit those in, too.

However, renowned mobile music making maven IK Multimedia thinks it has a solution for those who want to take a compact yet high-quality set of monitors on the road, and it's called the iLoud Micro Monitor (£300/$300).

A sister product to the original single-box iLoud, This two-speaker setup is billed as "the smallest active studio reference monitoring system in the world," and is designed to be used in small "makeshift" working spaces.

iLoud Micro Monitor certainly has the look and feel of a downsized 'proper' monitoring system rather than a posh pair of consumer-level computer speakers. Appearance-wise, the speakers have an appealing 'roundness' to them, and are reassuringly weighty, though they're certainly small and light enough to be carried around. There's a cable connection between the two of them, with the left-hand speaker housing all the controls and connectivity options.

There are both TRS 1/8-inch and RCA inputs, while controls comprise a rear-mounted volume knob, EQ switches and a Bluetooth pairing button. A headphones socket on the front would have been nice as well, but there isn't much space there to fit one in, to be fair.

Unlike the original iLoud, there's no battery-powering option, so the iLoud Micro Monitor's portability only extends as far the power cable does to the wall.

The speakers are designed to be positioned either on a desk - you can raise or lower the front-mounted "isolation base" to change the angle, which is handy - or on standard mic stands, giving you plenty of flexibility in this regard.

Each speaker housing contains a 3/4-inch tweeter, 3-inch woofer and bass reflex port, and we're promised 50W RMS with bass response down to 55Hz. The Micros are certainly loud enough for small project studio use - almost surprisingly loud, given their diminutive size - and, based on our tests, do a decent job of delivering the uncoloured, flat frequency response that they promise, with plenty of detail across the range and only a slight hint of boominess in the bottom end. We can certainly imagine them being popular with jet-setting producers who want a compact monitoring setup that they can fire up in a hotel room.

In fact, it may turn out to be the case that the iLoud Micro Monitor is most commonly bought as a second set of monitors; a setup that can be moved around easily and also one that can provide a different perspective on a mix. That said, if your main studio setup comprises little more than the corner of your living room, they're certainly worth considering as a main monitor. The Bluetooth option also means that the speakers can live another simultaneous life as a wireless listening setup.

IK may be on to something with the iLoud Micro Monitor, then. With so many of us now making music on multiple devices and in different locations, we'd expect the portable monitor market to get a lot bigger soon, but other manufacturers will have to go some to come up with a more attractive option than this.