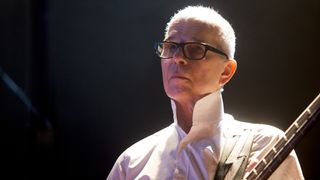 Tony Visconti: he and Eventide have got something to tell you, but not yet... (Image credit: Michael Hurcomb/Corbis)

Eventide has revealed that, for the past two years, it's been working with producer Tony Visconti on an "innovative plugin" inspired by some of the long-time Bowie collaborator's most iconic work.

Details regarding the plugin's specs and features are still a closely-guarded secret, but we're told that the project grew out of a meeting between Visconti and Eventide's Adrienne Humblet, Joe Waltz and Tony Agnello.

"The Eventide team listened as Visconti explained how he and Bowie worked together on the album Heroes," we're told. "He described how powerful an instrument Bowie's voice was (what he called "Bowie histrionics") and how he was able to harness that power by employing various microphone techniques.

"That meeting inspired the Eventide trio to create a plugin that would mimic and build upon the real world effects that Visconti had created. With Waltz heading up the project and Humblet writing the code, the plugin began to take form with Visconti and Agnello guiding it along the way. Now, after two years of collaboration, the plugin is approaching public release."

We'll bring you more news as we get it, but we know that the plugin has already had its first commercial use on a track created by producer Stewart Lerman for an upcoming episode of Martin Scorsese's HBO series vinyl.