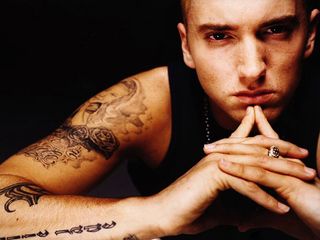 Eminem: he can still shift units.

If anyone was in any doubt that Eminem's comeback is going to be one of 2009's biggest musical happenings, the sales of his new 'single' should set them straight.

Crack a Bottle, which also features Dr. Dre and 50 Cent, shifted 418,000 digital copies in the US last week to move to the top of the Billboard hot 100. This is a new record for first week download sales.

This bodes well for the prospects of Eminem's new album, Relapse, which is scheduled for release in the first quarter of 2009.

Dr. Dre's long-awaited Detox long-player is in the pipeline, too - though this won't be released until Relapse is finished - and 50 Cent also has a record on the way.