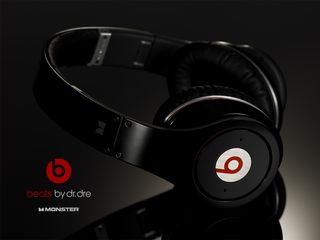 Dr. Dre's back, and this time, he's brought his own headphones.

Dr. Dre has been a producer, artist, actor and record exec in his time, and now he's entering the headphones market. His new Beats headphones will be available from July 25, and are being produced by Monster Cables.

Developed in collaboration with Interscope Geffen A&M Record Chairman Jimmy lovine, the new 'phones have noise-isolating properties and promise to "reproduce the full spectrum of sound that musical artists and producers hear in professional recording studios".

"Artists and producers work hard in the studio perfecting their sound, but people can't really hear it with normal headphones," says Dre, who will release his final album Detox later this year. "Most headphones can't handle the bass, the detail, the dynamics. Bottom line: the music doesn't move you. With Beats, people are going to hear what the artists hear and listen to the music the way they should - the way I do."

The Beats headphones will be available though Apple, Best Buy and the Beats By Dr. Dre website priced at $350. This being the case, you'll probably want to try before you buy.