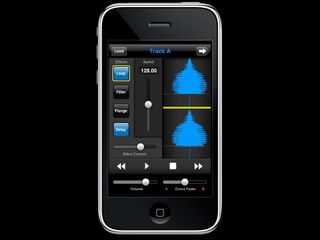 Mix your own Deadmau5-only set.

House producer Deadmau5 has endorsed a new iPhone/iPod touch app that not only enables you to mix his music, but could also point the way towards how other DJing software on the platform should look and feel.

Touch Mix enables you to flip between two virtual decks, each of which has crossfader and volume controls. You can adjust BPMs, and you'll find effects and a scratching option.

Ten Deadmau5 tracks come supplied though, sadly, it's not possible to import any other material. Presumably, though, a more 'open' version of the app could be released at some point (it was developed by Future Audio Workshop, which previously released the Circle synth).