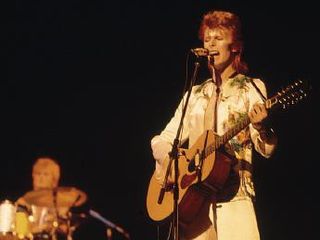 David Bowie has never been one to shy away from new technology, so it probably shouldn't come as any great surprise to learn that he's preparing a new iOS app that will enable fans to remix his 1975 single Golden Years.

Bounced down from the original 16-track recording, these were prepared by Golden Years and Station To Station (its parent album) producer Harry Maslin.

As well as the app, there'll also be a new Golden Years EP. Available on CD, 12-inch and as a digital download, this will feature the original single version and four brand new remixes of the track created by DJs Jeremy Sole, Anthony Valadez, Eric J Lawrence and Chris Douridas from the US radio station KCRW. These remixes are currently being streamed on KCRW.

- Multitrack view of the original song
- Activate / deactivate stem tracks
- Change stem tracks volume
- Create and save your own mix
- Export your mix as an MP3
- "Shake to mix": launches a random mix every time you shake your iPhone
- Play/Pause/Repeat
- Share with friends