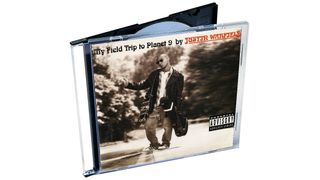 Justin Warfield's opus, My Field Trip To Planet 9, is wisely regarded as the best example of what the term Trip-Hop could possibly define. Its Funkadelic cast of characters, mind-boggling cultural references and experimental studio swagger form part of a melting pot that forged one of the truly cult Rap albums of the '90s.

Warfield made up the entire cast on the mic, often passing it to alter egos as he spat non-sequiturs, and generally got ill, while QDIII [the son of Quincy Jones!], and Prince Paul [De La Soul, Stetsasonic] initially handled production duties. During the year and a half the album took to make, they ran into sample clearance hell, (thanks Clapton, thanks Macca), leaving a massive hole in the running order that the other producers were too busy to fill.

Picking up the baton, Warfield locked himself away and turned in the lion's share of beats. With no one telling him what to do, he experimented with noise, genres, arrangement, personas and his own out-there record collection, to turn in some of the album's strongest work. Not bad for a teenage beatnik with no production credits to his name.

Three was the magic number and, between them and their cavalier use of samples, they helped create one of the only albums that can join the dots between the pioneering work of De La Soul's Three Feet High And Rising and Beck's Odelay.

The album would go on to fly massively under the radar on release in the US, however, with songs like B Boys on Acid, Drugstore Cowboy, and Live From The Opium Den making it hard for the label to push to the segregated radio of the day.

"The promo guy told me it was, 'Too white for black radio, and too black for white radio'," says Warfield today. "It was ahead of its time, for sure, but all I wanted to do was make something crazy, something trippy, but filled with my love of Hip-Hop." And that he did.

So, fall back into that beanbag, spark up the lava lamp, and let Justin tell you the story of the most far out, psychedelic, Hip-Hop album that there ever was, baby.

"I was 18 and living in LA when I started this album. The Gangsta side was big in the 'hood, but we were running around Hollywood, in the middle of something else. Me, Freestyle Fellowship, The Pharcyde (back when they were just dancers), Souls of Mischief... Everyone hanging out and swapping ideas.

"In the community it was like when you'd hear stories of all the '60s greats hanging out and jamming with each other. I'd play my records to other artists coming through my crib, and vice versa, and we'd all vibe. The album came out of that melting pot."

"The beat on this is one of mine. QDIII [Quincy Delight Jones III, son of Quincy Jones] had started the project with me, then [De La Soul producer] Prince Paul gave me some beats. Then a bunch of tracks were scrapped because of sample clearance issues, so I was left on my own to finish the album. I went into Image Recording Studios in LA after Everlast from House of Pain said the engineer there knew how to mix Hip-Hop.

"I'd never released any beats I'd made before. Quincy had showed me how to hook up tracks on my own with my buddy's SP-1200 sampler, which I'd loaded with bass notes a friend had played into it and bits from my record collection which had Rock, Psych, Jazz and weird stuff in there."

"Jarobi from A Tribe Called Quest was the one that suggested I shout the lyrics on this track. So I just started screaming at the top of my lungs. My voice gave out after about two takes. There was no Pro Tools back then, so I'm literally running out of breath on this one, punching it in. But we kept it. We kept all those types of mistakes."

"This beat is a Prince Paul beat. It was off a beat tape he gave me, which I still have. I listened to it the other day - I had to borrow a cassette player off a friend. It's still amazing. We would be in Paul's studio and people would come over and go, 'Man, you guys are doing some tripped out shit'. There was one part where Paul wanted me to say my name, and I thought it would be stupid, but the beat comes out and I go, 'My name is Justin, baby'. People love that part to this day."

"This was one of the first times I'd rapped really aggressively. It was almost like a Rock 'n' Roll beat from the '60s, so I matched that. I was also shouting out made-up groups in this song, too. I called out The Lemonheads and The Beatniks, which were imaginary groups that I was going to start, but never did. The album is filled with fake groups."

6. Live From The Opium Den

"This track, along with Introduction By Ellis Dee and Pick It Up Y'all were all done in the same day by me.

"This is my favourite track on the record, because the references on this track are crazy. I'm mentioning Lionel Dobie and Joey Buttafuoco. I made a lot of it up on the spot.

"Even though Prince Paul was amazing, and Quincy was my mentor, me having this lone freedom in the studio was where the album got its soul. I could reference Irish Mobster Jackie Flannery, then drop a bagpipe sample underneath."

"This was me really trying to do the weirdest, craziest shit I could possibly do. I was a massive fan of The Doors, Love, Folk music, Psychedelic Rock, Hip-Hop, Jane's Addiction, Led Zep... I was smoking dope with these guys' posters on my wall, as kids do.

"My mom would also be giving me Beat stuff like Alan Ginsberg, and I'd read that, along with Burroughs and A Clockwork Orange. The album became a treasure map. It was like, 'If you wanna know what I'm into follow these breadcrumbs'."

"This was strangely influenced by a Lenny Kravitz song, I forget which one. I started getting into his first record, and was hugely into him. It was just on some chilled shit. It was a style that was picked up by Digable Planets and PM Dawn. I was this link between De La Soul and Tribe and them guys. A British journalist told me he thought the term Trip-Hop was coined in a review for Planet 9."

"I think the original beat for this was Strange Brew by Cream, but we couldn't clear it. QDIII did this beat. He wasn't as weird as me, but he encouraged my weirdness. He'd be down for whatever. This track doesn't have a normal amount of bars, and it has me yelling 'Caligula!' at the end for a joke. That's me just passing by the mic and yelling stuff. Most producers would tidy that up. He was open-minded. I learned a lot from him. Like I say, he was my mentor."

"This is another dope Quincy beat from the same session as the last track. The way he modulated the samples and everything was amazing. I sang on this and played guitar. At the time I was trying to start a Rock band so had a load of electric guitar on the beat, which nobody was really doing in Hip-Hop at the time."

"This was the first beat I made by myself for the album. It was the first beat ever put into the borrowed sampler I was using, too. I was obsessed with the movie Drugstore Cowboy, so I made a track with me and my friends starring in it. My buddy, Balthazar Getty, would be running around LA getting in trouble anyway. It was a tribute to High Plains Drifter by the Beastie Boys too. I was so in that realm as well."

"This goes all Speed Metal at the end. I just wanted to go off. I programmed the drums and sampled my engineer, Bob Morse, who played some Metal guitar. I was trying to come up with alternate characters that I could play on the mic, too, so I invented this one guy called Salmon Diamond, a Jewish rapper, who I pass the mic to. Then Mr Cool was the chilled out guy in the booth.

"You've gotta remember I was this young guy alone at this point getting sick of the sound of my own voice, so I made up these guys."

"This was the last song we did for the album. I'd started the project with QDIII, then Prince Paul came in, but at the end I was on my own turning out this bugged out stuff. During that time Quincy was in the 'hood making harder, Hip-Hop stuff. It was dope but not where I was at. He wanted to bookend the album experience by adding one more beat and he came up with this. It was the dopest shit I'd ever heard. He even samples some trippy records his dad, Quincy Jones senior, had made back in the day."

"This was my attempt at doing Three Days by Jane's Addiction. At this point I was completely enamoured by the band, and idolised Perry Farrell.

"During this song I was getting so bored. Remember, I started this record when I was 18, and it came out when I was 20. By this song I wanted to be a singer, not a rapper. I programmed a beat, which I slowed down on a two-inch tape machine, old school style, until it sounded all half-time and stoney. Then I played guitar on it and sang. I was telling a story like Three Days."

15. Thoughts In The Buttermilk

"This was a great Prince Paul beat. After I met him in New York he invited me to his studio in Long Island. He met me off the train and we went to his crib and we played his beat tapes and I went, 'That one. That one. That one'. I was in New York for the best two weeks of my life, then I went back to LA and wrote my rhymes to Paul's beats. I loved Jazz so asked if he knew any horn players, so we got trumpet and sax on this too. I sang them the parts I wanted them to play. This was the first time I'd worked with live musicians."

"When I handed the album in no one knew what the fuck to do with it. Because of its reception, or lack of thereof, they put out some of the straighter songs as singles, but it was just too out-there for people. I just wanted to tour it so put together a live band and did electric and acoustic versions of the songs. Not a lot of people were doing live Hip-Hop then. And nobody was making albums like this. It was a wild album. It was free range. The lunatics had taken over the asylum, for sure."