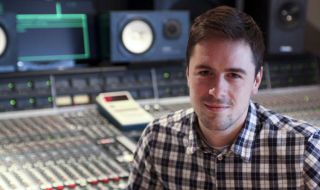 Charlie has worked with Florence And The Machine, The Maccabees and Swim Deep

PRODUCTION EXPO 2013: British music producer and mix engineer Charlie Hugall's diverse discography suggests that he's a man at home in any genre. In the last few years he's collaborated with Ed Sheeran, Florence and The Machine (on the top ten smash You've Got The Love), Crystal Fighters and The Kaiser Chiefs.

Not that he's all about big names and big projects. In fact, Hugall is happiest moulding the sound of new bands like Delilah, Alex Winston and Lucy Rose.

Whatever their chart success, Huggall approaches studio time with his bands in the same fashion. For this relative youngster (he's just 30) it's all about pre-production and creating a space in the studio that encourages creativity. Here we find out a bit more about it...

With all the bands you work with, is it true you like to create a certain type of atmosphere in the studio?

"I like experimenting and making the studio a playful environment where it's fearless - that's very important. Artists, especially debut artists, have one thing that holds them back and that's the fear of success and failure. They're both as scary as each other.

"I feel like more constructive and productive and interesting stuff happens when people have confronted that. Then you can record and it has nothing to do with those things any more. A song is a precious thing, but you need to be bold and daring with it, and I try and create an environment where that can happen."

As well as the technical side of things, what other qualities are important for a producer to bring to the table?

"I'm a listener, for one thing. I like being the extra set of ears, and the naïve one, if that makes sense. I like to present an idea or suggest a direction that's against the grain, or against the normal structure of the way you approach recording or writing.

"One thing I have been doing recently is just finding directions a lot more for people, rather than just take a song and work to its merits. I've got a lot more into finding more extreme direction changes, and then being able to facilitate that.

"I like to get the artist into a different frame of mind. I give them references to make them aware of other music and help them realise there are other ways to do things.

What is it you love about working with bands when they are just starting out?

"I work with a lot of debut artists. I just love working at that point with people as they're so open. They're just up for working with interesting ideas. I think for a lot of acts it's probably the first time they hear something of their own recorded well. Suddenly they go, 'Wow! This actually sounds like a record'. There is a lot more of a buzz with debut artists, generally."

So what kind of preparation works best before starting a new project?

"I really like pre-production. I like to go into the studio with a really strong idea of a direction. I prefer to have bounced around a few ideas beforehand with the people I work with; just to go over what we like about the songs and what we want to bring out of the song or album we are working on, in terms of references or whatever.

"Pre-production is the key, especially with a band. Even if it's tiny adjustments to a note or the arrangement, or subtle things like the velocity. When you're in the studio it's harder to do that. You always feel like you need to deliver as you're paying much for the studio everyday. It's like, 'We've spent £600 today and we've basically done nothing'. I hate that. I hate wasting money. You've gotta be on top of it, so doing that before you get in the studio helps you get the best results."

Should a producer be selective with who he works with? What's your approach?

"It's kind of strange. I feel that a lot of the time I choose quite weird ones. I've turned down some projects that have gone on to do really well. It all comes down to taste. I'm employed because I've got particular taste, really. Which is what it all boils down to. You've got to follow your heart. It's all about what you like and what you're good at."

Should production techniques change from project to project?

"I would say so. I work on quite a broad range of things. I don't like to go too far down one path. Over the past couple of years I've done quite a lot of different things. I did a kind of folk record last year. Then this year I've worked on a rock album, a dance record and at the moment I'm doing an acoustic pop record. I don't want to just carry over techniques from the previous project I've worked on.

"The thing I love working on more than anything is strange pop - alt-pop stuff. My ideal person to work with would be Beach House. They have that kind of really highly melodic, but really sort of dirty, left of centre pop. I've worked with quite a few artists in that direction, and I always enjoy it more than anything. When you're working on that alt-pop sound there is that fearlessness too."

Charlie worked with Birmingham's Swim Deep on their recently released debut album, Where The Heaven Are We

Is that what drew you to working with the B-Town band Swim Deep recently?

"Absolutely. I just did this record with them, and they're like a pop band but with a massive nod to 90s grunge. They remind me of Ned's Atomic Dustbin. They were just so open to anything and everything. They never had that feeling you couldn't do something just because it's out of your genre.

"I feel like some people's vision of how their record will come out is quite blinkered. I think it's quite important to open that up. It's my job to make bands open up and see different possibilities in their music."