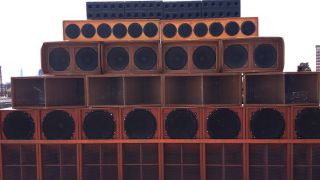 Try fitting that in the back of a Nova!

Since the '70s UK-based Mikey Dread and his brother Jah T have operated the legendary Channel One sound system. Among their achievements are playing for 30 consecutive years at the Notting Hill Carnival, and taking their bass-heavy sounds to festivals all over the world. We caught up with Mikey to find out about his life in front of the speakers.

How did you get involved in sound systems?

"I've been into sound systems since I was in school, we've always had sound systems in the family, so that's how it came about: the old man used to have a sound system, and it basically passed down to me."

What are your first sound system memories?

"We used to have dances in our house years ago, late '60s, I would have been about five or six."

How old would you have been when you started helping out?

"I was about thirteen or fourteen"

And your dad taught you about the electronics and acoustic aspects of making speakers?

"We were always watching it because we'd see guys coming round fixing amplifiers in our living room from day one. So you know there were electronic wires and boxes all over the place!"

How do you go about designing a sound system?

"You get an idea on paper of what you really want. Before today's game you built it to a certain spec, building like four 18" speakers in one box, which we used to call quads, and double boxes and things like that.

Do you decide on the crossover frequencies yourself? How much do you build from scratch?

"The audience don't care what you got, they just wanna hear music! So once you've got good preamps that are sounding good the rest should really follow, because the preamp is the 'brain'. And then when you've got a good turntable and a good needle to play you can go ahead!

What's most important to you in a sound system: definition, massive sub?

"A sound system needs to sound clean and nice so people can hear the melody. There's no use having a lot of bass when you haven't got any mids and tops! To me that doesn't make now sense, you want to hear what the music is saying. you want to hear the words.

"We're Channel One, we're all round, we don't need to show as much bass as we can, we're just trying to play as normal as we can to get the message across, and that's what it's all about."

So the message in the music is an important thing to you?

There has been a fair bit of controversy over the past couple of decades regarding dancehall's perceived intolerance of homosexuality.

"It's not really up our street to be derogatory towards this person or that person. We're a Rasta sound system: we try to keep it clean living, we try to teach kids how to live properly, and we do that through our music. So we're not a sound system where you're going to come and hear swearing lyrics, we don't do that.

"We're a Rastaman sound system; you stick to your knowledge, and your knowledge is worldwide, not just in that dance at that one time. And because of the Internet, you say something today, and it goes round the world in five minutes.

"This is why you have to keep it clean. People enjoy coming here whether they're young or old, they come to Channel One's corner in the carnival because they're going to hear good lyrics and good music."

What would you say to people who have avoided seeing sound systems in the past because they're worried about attitude or homophobia?

"Come to a Rastaman sound system, you won't go wrong there!"

How has the music changed over the years?

"I've been listening to music since the late 60s, that's four or five decades in music, and you can see the changes. Like everything else, some music a good, some music a not so good.

"You can only play a certain amount of tunes in one night, so we weed out the bad ones, and if you can play good tunes all evening people will keep on coming back."

Is the reggae scene healthy at the moment?

"Reggae scene is very healthy, you can't fault it. Reggae might not get onto the BBC, ITV whatever but it will always be there, and it has a crowd that follows it, even those who are into the BBC and ITV. Because of what we've done in the past decade you'll get a lot of people who want to build sound systems now.

"Sound system culture is up there, it's just the big organisations don't want to recognise it. All we can do it keep on pushing the fire out, and they might catch on to it later."

Reggae does seem massive both in the UK and worldwide. Why aren't more UK-based reggae artists aren't blowing up?

"People are starting to take notice of what we're doing. There are sound systems all over the world now, everywhere we go now, even Colombia! Peru, Chile, they've all got sound systems now."

It seems as if clubs are having a really hard time staying open in the UK, whereas festivals appear to be flourishing. Are festivals the future for more underground styles of music?

"Festivals are good, but you do have pockets of clubs with sound systems in the clubs. Not too long ago there were no clubs letting sound systems into the club at all, but now there's a few in London, because the clubs see they are significant in what we do. So they are the ones that are actually brave enough to let you bring a sound system in and make it work for a night once a month or whatever. Twelve nights in a year... that will do me!"

Have you ever had challenges setting up in a club?

"You'll always have challenges, even down to the neighbourhood... someone will hear a bit of bassline in their house, and they'll go to the council and say 'there's too much bass' or whatever. But a sound system will play bass for three, four, five minutes... hip-hop, garage or whatever will play it constantly, you'll get that banging all night long.

"Sound systems are completely different - we take off a record then put on another record! You don't have one bassline playing for six hours straight! You come to a Channel One session and it's a spiritual event. That's how we try to work it. So you'll hear old stuff from '60s, '70s, right up to the present day. All vinyl, we don't play CD, we don't play laptop, we don't play MiniDisc, we don't play Serato, all turntable."

One reason DJs cite for not playing off vinyl is that clubs don't keep their turntables in a good state of repair. I guess that's not an issue if you've got you're doing the tech yourselves?

"If you're doing the work yourself you make sure you look after your equipment. We don't have six or seven DJs play on our system in a night, Channel One sound system is built for Channel One to play on, not for other people to play on."

Mikey Dread and Jah T are about embark on their 60 Years of UK Sound System tour with Mad Professor. For more info check out the Channel One website and Facebook page.