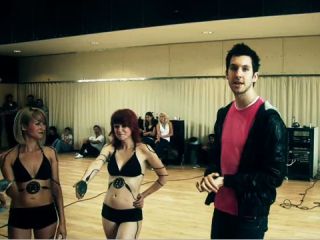 Calvin Harris: he's got all the girls, etc.

Calvin Harris has created what he likes to call the 'Humanthesizer', which is being billed as 'the first human synth'.

The system works like this: wire various humans up to a computer and cover them in 'connective paint' so that they trigger different sounds (piano, bass, drums, synths etc) when they're touched. Any humans will do, but Harris unashamedly chose to use not-unattractive girls in bikinis.

The results of his experiment (he's a man of science, clearly), can be witnessed in the video below, as the Humanthesizer is used to recreate new single Ready For The Weekend.

We've also posted a 'making of' video, in which the boffins behind the system explain all the technical stuff.

One thing we'd like to raise, though, is whether this really is the first human synth. According to our records, the creators of the Body Music video got there first…