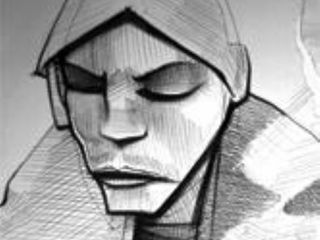 An artist's impression of what Burial looks like. Possibly.

Burial may be one of the biggest names on the nascent dubstep scene, but his true identity remains a closely guarded secret. However, with his album Untrue now one of the favourites to scoop the 2008 Mercury Music Prize, the net appears to be closing in on the enigmatic producer, and it may only be a matter of time before he's unmasked.

UK tabloid The Sun is asking readers to get in touch if they know who Burial is; the same paper claims that the artist told them in a phone conversation that "Only five people know I makes tunes".

The Sun also speculates that Burial could be an assumed name taken by either Norman Cook or Aphex Twin, but MusicRadar thinks this highly unlikely.

More plausible is the claim made in The Independent newspaper in February that Burial is actually William Bevan, an alumnus of Elliot Smith school in South London. Hot Chip's Joe Goddard also attended Elliot Smith, and he's on record as saying that Burial/Bevan was in the year above him.

This link hasn't been confirmed, though, so the race to remove Burial's cloak of secrecy is still on. Will he attend the Mercury ceremony? Will he reveal himself if he does? Does he really make all his music in Sound Forge? So many questions remain unanswered.