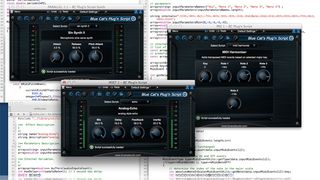 If you've always dreamed of creating your own effects and instruments but haven't known where to start, Blue Cat's Plug'n Script could be the answer.

Operating as a plugin - which means you can do your building work from the comfort of your DAW - Plug'n Script is said to require "very little knowledge about programming," which sounds promising if you've got plenty of ideas but no idea how to turn them into reality.

What's more, you can run existing scripts (46 come included) and those written by others, so you could get something out of this plugin even if you don't use it to create anything yourself.

Just to briefly blind you with science, we should say that Plug'n Script uses the AngelScript scripting engine - which was originally developed for video games and has similarities with Java, C#, C++ and javascript - and a JIT compiler that helps you to compile scripts into machine code for optimal performance.

Plug'n Script is available now for PC and Mac and in all major plugin formats. You can currently buy it from the Blue Cat Audio website for the discounted price of $74/€59.