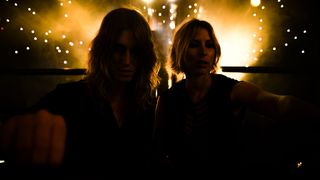 "I'm thinking of diving into some semi-modular setups after seeing the Roland Semi-Modular AIRA system and the Eurorack System 500 that they're rolling out soon."

It takes a forward-thinking label to see the potential where it runs deepest, and Kompakt appear to have struck gold with Blond:ish. Formed by Canadians Anstascia D'Elene Corniere and Vivie-ann Bakos in 2008, the duo's debut album Welcome To The Present is an extraordinary departure from their previous raft of dance-based EPs.

Taking the listener on a mystical journey in sound, Corniere and Bakos have crafted an album of rich, intoxicating soundscapes, incessant House grooves and deep pastoral ambiences. For Blond:ish, the journey surely starts now.

What were your initial influences in the early years?

Anstascia: "I grew up to my parents 60s/70s music, like The Gypsy Kings and French artists such as Charles Aznavou, and my teenage years were influenced by the time I spent in France every summer with my cousins listening to Pink Floyd and Depeche Mode.

"I got heavily into electronic music after high school when I moved to Montreal; that's where I spent way too many nights dancing away at raves, and nightclubs like 'Stereo'."

Viv: "I grew up listening to a lot of music on my parents' reel-to-reel; anything from Soul, Psychedelic Rock, Krautrock or Disco to stuff like Tommy Petty and Roy Orbison."

When did you discover that you complimented each other as artists and performers?

Anstascia: "Back in 2008. We decided to throw a weekly party together at a club called Cherry in Montreal. We both deejayed in separate rooms, but one night we decided to go back-to-back. It worked out really well musically and someone suggested we become a duo; I guess we've been on pretty much the same vibe ever since.

"We do change our tastes a lot because we get bored quite easily, but we've always managed to find the middle ground and compromise."

How did those influences you mentioned absorb into your music?

Anstascia: "Over the last few years, we've been exploring a lot of different shamanic and eastern types of music. It's a whole other world, one that we didn't have a chance to hear as we were so focused on Techno. You can definitely hear a lot of those influences on our new album if you take a listen."

Why relocate to Barcelona?

Anstascia: "After living in London for about four years, we decided that it was time for a change. London is great and served a purpose, but the cost of living in Barcelona is quite cheap, the weather is never anything to complain about and there are beaches, lots of parks and all our friends are within walking distance.

"Also, the airport is only 17 minutes away from home, which is incredibly convenient. In our opinion, it allows us to have an easier lifestyle in-between touring, and no more tube trains!"

What are the benefits of signing to a great label like Kompakt?

Anstascia: "They've been extremely supportive of our creative endeavours and have let us explore the many different sides of our musical tastes. It's their expertise and passion that has enabled them to be in this rocky industry for over 20 years now, and we're really grateful to be part of the family."

I understand India had an effect on the writing of Welcome To The present; was the country's influence psychedelic or philosophical?

Anstascia: "It was definitely a combination of both. When we got to India, we'd already finished writing most of the album, so the trip was mostly focused on getting deep into the meaning behind the record; the message behind it and the title, track names and artwork. During the trip, we encountered countless synchronicities that shifted our perceptions of reality."

When in the studio, how do you embark on the creative process?

Anstascia: "I'd say 90% of the album was recorded using Ableton live and 10% in Logic. Viv and I usually start by laying down ideas in Ableton separately, then once we have something good and solid we share projects and collaborate. We've found that this is the most efficient way for us to work.

"Viv loves to work on grooves, drums and basslines and I'm always determined to find the perfect melody, weird sounds or the meat of the track, so I'll often spend countless hours going through sounds and tweaking them."

Viv: "Anstascia plays the professional triangle, so she won't really let me take that role from her. Other than that, the ideas come from all sorts of different places. We try not to be rigid; we believe that everything has a vibration, and that's why we like to find sounds from all sorts of unexpected places."

Was the new album recorded in a home studio?

Viv: "We haven't had a proper, acoustically treated studio in our homes for a few years because we've been moving around a lot, so mixing has to be done in proper studios. I used to like doing fun projects, like building bass traps, but because of our limited set-up we've really had to focus on being productive and having a 'less is more' concept."

Does that lack of having a settled space lead you more towards the convenience of software?

Viv: "Actually, there's not too many plugins and synths, although we do use Spectrasonics Omnisphere, Absynth and plugins from UAD. We like the Moog Multimode Filter, Brainworx' Digital Multiband Equaliser and Manley Massive. We also use iZotope Trash distortion plugin and Native Instruments The Mouth.

"I'm thinking of diving into some semi-modular setups after seeing the Roland Semi-Modular AIRA system and the Eurorack System 500 that they're rolling out soon."

What hardware synths and other gear are you using?

Viv: "We use a Dave Smith Prophet 8, Roland SH-101, Moog Sub37, Teenage Engineering's OP-1, and a couple of controllers: the Akai APC40 and MPK Mini. We also have an Elektron Machinedrum, which I guess is a drum synth… but it's a toy for us! We use Genelec 8030Bs for monitoring."

Viv: "For this album, we used Pultec's EQP1A Equaliser and SSL compressor and a variety of vintage German broadcast EQs including the Siemens W295, Filtek MK3 and a Telefunken. A lot of that was processed using UAD's Apollo Twin high-res audio interface and the Electro-Harmonix Memory Man delay.

"For vocal effects, we used TC-Helicon's VoiceLive Touch 2, and all the outboard is run through a modded Yamaha PM-1000 desk for flavour!"

The album blends a lot of electroacoustic and electronic sounds. What were your favourite sound sources?

Viv: "Our favourite sound sources were definitely the ones recorded on our Zoom Hh2n recorder. Those spontaneous recordings that we make when travelling around the world are the best ones for us.

"The blue birds outside our window turned into some nice snares and random hits; the kids outside the school in Barcelona made for some nice ambient atmospheres; and the family of five blonde Germans we discovered playing harmoniums, harps and acoustic instruments made for a nice morning jam while eating breakfast in Tulum.

"We have two friends in Tulum that are brothers and live in a jungle. They make their own instruments, so we got some interesting melodies from them on the album too."

Was it challenging to create a cohesive-sounding vibe using so many field recordings?

Viv: "In the past, we set out by really wanting to make an EP sound a certain way, but realised it always turned out sounding completely different. So we learned our lesson this time and created a mutual vibe that we wanted the album to portray and a message in the music that we hoped would come through.

"This was our first shot at an album, so we decided to avoid the distraction of travelling to gigs on weekends and fully immersed ourselves in the experience. We wanted to give it all of our attention and allow ourselves the time to be super-creative, as it can take time to peel off those layers of creativity."

What does the dialogue on the final track It Starts Now represent?

Viv: "Umm... this is a big question! It has many meanings but, first and foremost, it was a little look into the current state of the world and how ego and fear is dominating right now; it's all gotten really out of control. The world is a reflection of ourselves and Alan Watt's message has multiple meanings, but we wanted to bring the listener to a place where nothing else matters... no ego, no thoughts, just being each sound and space between the notes. Hence the album name, Welcome To The Present.

"On the other side, we didn't want it to stop there. Watt's message is also an invitation to explore the present through meditation, gong baths, breathing techniques, yoga, and just being more aware and taking action on that."

The new Blond:ish album 'Welcome To The Present' is out now on Kompakt and you can purchase on vinyl, CD or from iTunes. Check out the duo's Soundcloud, Facebook and Twitter pages for more info.