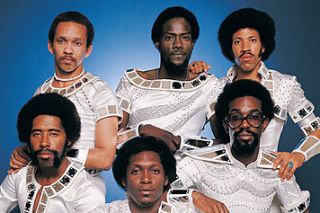 The Commodores: their music has aged better than their clothes.

Led Zeppelin, The Police and The Verve already have, Bad Company are about to and, according to Matt Sorum, even Guns N' Roses will do eventually. Yep, getting back together is the new splitting up, but in the midst of all the other reunion talk, one potential reformation seems to have gone relatively unnoticed.

Last month, Lionel Ritchie hinted that a Commodores reunion could be on the cards. "We'd better do it now, or in the next ten years, nobody would care," he said.

If you're looking for evidence, just go and listen to Machine Gun, the band's 1974 debut. The opening, title track (it's so-called because the Clavinet playing on it reminded Motown boss Berry Gordy of gunfire) is a synth-fuelled instrumental workout that's about as far removed from Dancing On The Ceiling as you can get.

Next up is Young Girls Are My Weakness - a cut that's as sleazy as its dubious title suggests - before the band get all righteous on I Feel Sanctified and toss in yet another winning groove by way of The Bump.

Latterly, Ritchie's penchant for balladry was more readily indulged - Easy and Three Times a Lady were massive hits - but 1977's Brick House proved that The Commodores could still rule the dancefloor, with lines such as "36-24-36 - what a winning hand" demonstrating that romance wasn't all they had on their minds.

These records are classics, and still sound great today. Whether Ritchie and co can ever breathe such fiery funk again remains to be seen, but I'd love to see them try.