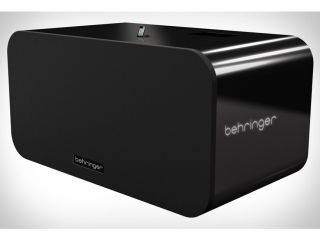 Behringer's product range has been growing for years, but when we heard that it's releasing a new iPod dock we were a little surprised. Then when we saw it, we were VERY surprised.

Called the Behringer iNuke Boom, it's an enormous eight foot wide, four feet tall behemoth, weighing in at over 700lbs.

Could it be that Behringer hassuffered the same fate as the man who accidentally ordered a giant slipper from a factory in China after some confusion over where the decimal point was? Or was this a feet and inches mess like the Stonehenge scene in the movie Spinal Tap? Either way, we think it's brilliant!

For $30k, though, let's hope it comes with a remote control (or a step ladder) at least.iNuke Boom will be launched at CES 2012 in January.