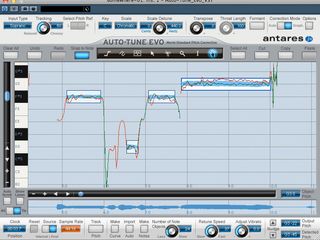 Even your Granny's probably heard of Auto-Tune by now.

Antares' Auto-Tune seems to have been everywhere in 2008 - most notably in the studios of T-Pain, Kanye West and Lil Wayne - so the time was probably right for a song that parodied the plug-in's ubiquity.

This has been delivered by a chap called Bobby Ray Simmons. His track, Auto-Tune, lampoons stars' over-reliance on the software, though we have to say that it didn't exactly have us rolling in the aisles.

The chorus goes: "Well I was in the studio/But I couldn't hit the notes/I could've got a vocal coach/But I ain't want no vocal coach/Then someone showed me this plug-in/So you can't hear the notes I miss/So I don't need no vocalist/And now I got an instant hit."

Biting satire it ain't (suffice to say, the whole vocal is Auto-Tuned), but it could have been worse.

Check out the video below.