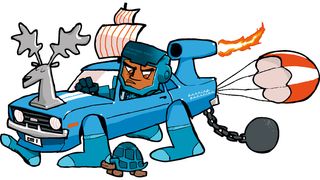 Whenever a software company releases a significant update to a product, they're walking a tightrope. On the one hand, users expect bells and whistles that will reassure them that the software is still progressing and remains state of the art, but many of these users are also uncomfortable with change.

People take comfort in familiarity, and when something they love is subject to a radical overhaul, the response can be frosty if there's any perception that elements of what made it great in the first place have been lost, or that it's too different to get a handle on - remember Homer's ill-received attempt at reinventing the automobile in The Simpsons?

In fact, we can recall plenty of occasions on which long-time users of a particular piece of software have complained that a new version isn't as good as the one it replaces.

So, are major updates always necessary, and what motivates companies to release them?

One update that's sparked some debate over the past few months is the one that was made to SoundCloud, which is the music-sharing platform favoured by most computer musicians. When it was launched, many complained (quite loudly) that the new design favours listeners rather than the musicians who create a lot of the content. So, what motivated the rethink?

"There were a few reasons," explains SoundCloud founder and CTO Eric Wahlforss. "Firstly, we wanted to provide our community with a sound platform that was at the forefront of today's web standards. By recognising the possibilities enabled by our own API and responding to user feedback and behaviour gathered over the past few years, it meant we were able to completely reengineer the platform and ultimately provide a far superior service.

"Secondly, our mission has always been to 'unmute the web', and in order to make this truly achievable it was necessary to introduce and improve features to make sound creation and sharing simpler, faster and more social.

"Thirdly, creators are now posting over ten hours of music and audio every minute, and the platform reaches over 180 million people every month, so we felt it was important to ensure that everyone has the opportunity to more easily explore and discover this world of original music and audio content, as well as to connect and share with the largest community of artists, bands, podcasters and other sound creators."

In addition, Wahlforss tells us that there were four primary motivations for the SoundCloud redesign: to enable users to discover new and original sounds, connect with sound creators, share what they hear, and have a better mobile experience. But how does he respond to the criticism from some musicians that the new SoundCloud feels more like it's been designed for listeners than uploaders?

"With the new SoundCloud, our aim is to provide a platform that not only continues to support our core community of creators, but which also allows the world to connect with them in ways that haven't been possible before. Unlike other platforms, our guiding light has always been the creators and musicians that have made SoundCloud what it is today.

"We know that letting more people curate and discover their music and sounds will lead to more listens, and that's a big motivator for sharing your work in the first place."

Boiled down, their logic is thus: if the new SoundCloud does indeed provide an enhanced experience for listeners (and attracts more of them), then those who actually create the music should greatly benefit from increased public exposure.

"With the new SoundCloud, our aim is to provide a platform that not only continues to support our core community of creators, but which also allows the world to connect with them in ways that haven't been possible before."

It also highlights a more general point about updates: when a major new version of a product is released, it may be designed as much (and sometimes more) to bring in new users as it is to please existing ones.

All that said, though, will SoundCloud be willing to adapt its new design based on feedback from long-term fans?

"Since launching the new SoundCloud in December, we have taken on board all the constructive feedback from both our existing and new users," says Eric Wahlforss.

"At SoundCloud, we've always liked to ship things early and then iterate based on feedback. We are continuously listening to the community and looking at ways to improve and adapt specific features. In the past couple of months we have already made updates to timed comments, spotlight, suggested followers and visibility of groups, for example. Expect a continuous evolution."

A matter of timing

One of the most eagerly awaited music software updates of 2013 is Ableton's Live 9, which is set to arrive almost four years after the launch of Live 8. In software terms, this is all but an eternity, and you suspect that it would have been tempting for Ableton to release a new version long before now just to satisfy the many users who've been clamouring for it.

So, why did it decide that now is the right time to update Live and what were the primary considerations when putting together version 9?

Amaury Groc is Product Manager: Specification at Ableton, and he tells us: "There are many factors that decide when an update should be released. We have to balance our confidence in the quality of what we've achieved, the meaning of the new features as a whole, our users' expectations, our company health and a ton of other things."

Of course, Ableton have been through this process before, so what (if anything), we wonder, did it learn from previous Live updates that made it do things differently this time around?

"Each release, and the way we work, teaches us many things," says Groc. "It's difficult to point out single things, but what we did different this time is that we tested the software with external partners constantly, so as to maintain a high quality standard. We also visited and interviewed musicians, involved them in work sessions and gave them software to use in their everyday music making."

One thing that's certainly different this time is Live 9's gestation period. Previously, Ableton was releasing a new version every year to 18 months; this is a pattern that many DAW developers seem to follow, and it does make you wonder if, in some cases, a release is dictated more by a calendar than it is necessity.

A lot of users, though, seem surprisingly keen to give developers their money for updates, and become irate when they don't arrive 'on schedule'. Is Amaury Groc surprised by this?

"You do wonder if, in some cases, a release is dictated more by a calendar than it is necessity."

"I guess people like new things to play with… they like to be surprised," he says. "I guess it's the same as why people buy new phones when they already have one that works well."

And that, in a nutshell, is it: both customers and companies thrive on software updates, the former because they like the feeling of getting something new and 'better', and the latter because it gives them an invaluable source of revenue. That being the case, necessity might not have so much to do with it after all.

This article originally appeared in issue 188 of Computer Music magazine.