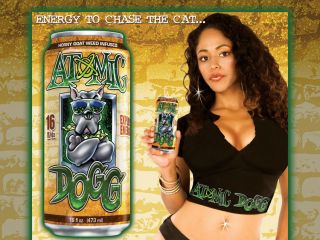 Can you handle the Atomic Dogg?

The Mothership has returned - as an energy drink. Atomic Dogg is a new brew from Hall Of Fame Beverages, and the George Clinton track of (almost) the same name is being used to promote it.

Clinton is by no means the first artist to involve himself in the food and drink industry, though MusicRadar isn't totally convinced that Atomic Dogg will be to the P-Funk legend's taste. His many brushes with the law indicate that he likes to pick himself up with substances that are rather stronger.

You can listen to the Atomic Dogg radio ad on the product website.