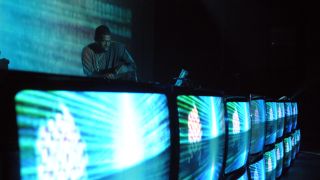 In case you missed it, hip-hop reached a milestone earlier this year. 11 August marked forty years since DJ Kool Herc's first party at 1520 Sedgwick Ave, generally recognised as the birth of the culture.

Who could have predicted its growth? What began playing in the function room of an unremarkable South Bronx high rise, can now be heard thumping out of arena soundsystems as rap music morphed from an underground artform into a mainstream one. Of course, a lot can happen in four decades.

As the music filtered down from New York to major rap territories in LA, Atlanta, Detroit, Houston and then the rest of the world, its form has evolved almost beyond recognition. Simple hip hop breaks made between two turntables developed into more complicated sampling techniques and drum machine mastery, opening the door for an explosion of distinct subgenres and micro-cultures.

Although still largely regionalised even in the digital age, production styles now combine and ricochet off one another more frequently, stumbling upon fresh aesthetics and finding new audiences. So, just as traditional boom bap, G-funk and crunk may have seen their best days, new production quirks have risen to the surface to be perfected and adapted.

It's this constant process of evolution that helps keep rap exciting, so here are ten producers redefining the genre for the modern day.

As Gucci Mane's right-hand man, Zaytoven has been pulling the strings behind Atlanta's trap scene since the mid-00s - but he continues to surprise in 2013. His beats walk a line - although rarely a straight one - between the joyfully infectious and the outright bizarre, combing colourful hooks with moments of barmy off-key brilliance.

While Gucci himself has struggled against Lean addiction and mental health, Zaytoven's lopsided production has been the perfect match for the rapper's inebriated drawl. Despite those sad circumstances, on a sonic level Zay has had a faultless year - blending pitch-shifted keyboards and sporadic MPC drums to devastating effect. Although a veteran by this point, Zaytoven still writes primarily for mixtapes where his wildest ideas are encouraged - occasionally even making for leftfield crossovers like Migos' ubiquitous 'Versace' earlier this year.

When you're as certain of your own influence as Kanye West, the validation of a list like this is hardly important - Ye doesn't so much blow on his own trumpet as resurrect the ghost of Louis Armstrong and get ol' Satchmo to blow it for him.

But then, how many producers can claim to have redefined hip hop as many times as West? While it was his warm and loveable soul sampling at the turn of the '00s that made his name, Kanye has trodden his own defiant path and dragged the genre along with him down strange, artistic avenues. Imitators inevitably followed but few can match Kanye for execution, whose ground-breaking '808s & Heartbreak' album from 2008 continues to loom large over rap today.

West swims purposefully against the tide again on this year's Yeezus, channelling rave, dancehall and harsh industrial sounds into a bastard mix purely of his own making. By now his role is less that of a beatmaker but a producer in the real sense of the word, hand-picking talent from all corners of the music industry and feeding it into his vision. Who knows what influence Yeezus will have in years to come, but it's another bold move that has widened the playing field once again.

Spend enough time in the depths of internet rap blogs and you'll soon grow cynical of new subgenres, yet there's something about Tree and his creation - "Soul Trap" - that strikes a chord.

The soul part owes much to the way he uses vocals, as the Chicago rapper reaches right to the back of his throat for a rasped delivery that could make even the most mundane of stories sound absolutely vital. There's his ear for a sample, too, drawing largely from soul and pop records - both classic and obscure - and chopping them up with a skill not dissimilar from a certain other Chicago super producer. Where Tree brings his style together, though, is with jittering trap hi-hats and bass drops straight out of Atlanta (where he briefly lived), combining it all with a surprising coherence.

Mike Will Made It

You'd be forgiven for forgetting where hits came from before Mike Will began making them, whose recent dominance over chart rap has made him the genre's most sought after producer.

Breaking through in 2011 with Meek Mill's unstoppable 'Tupac Back', the Atlanta maestro has quickly crafted a catalogue of bangers for just about everyone in rap's upper echelons - including Future, Lil Wayne, 2 Chainz and Jay Z to name but a few.

His sound is a refinement of the trap template previously set by Lex Luger - all irresistible synths, 808s and hi hat rolls - but with a wider dynamic range that should give him a greater longevity. What's more, Mike Will has begun to add his stamp to the world of pop as well, and having recently produced singles for both Rihanna and Miley Cyrus, you can expect his namesake producer drop to stick around for a long time to come.

Make no mistake, Ka is a lyricist first, but over the course of three solo albums the Brownsville emcee has earned a place here for reducing rap down to its bare bones.

Even to say that suggests a reliance on core elements, but by now Ka has taken most of the drums away too - leaving only a hint of percussion and leading with a smoky blend of piano, organ and fuzzy midnight guitars.

Considering he was only recently encouraged to produce his own beats by mentor and collaborator Roc Marciano, Ka's productions are surprisingly bold - the sparseness of his arrangements adding a sad, gritty context to his detailed hood narratives. Ka's beats are worth keeping an eye on, then, if only to see how much more fat can be cut from the bone.

If it's party rap you're after, then look no further then DJ Mustard (real name Dijon, and we're not joking), whose self-defined "ratchet music" is the new sound of the West Coast.

Mustard's sparse, minimal beats are made in Reason out of simple, almost child-like synth lines and a mixture of hand claps and thumping 808s.

It's both infectious and extremely distinctive, and while there are a whole host of producers now working effectively from the same mould, it's Mustard who is scoring the major album placements and spreading his sound outwards of Los Angeles.

Whether through his label Brainfeeder, his lauded solo records, or more explicit rap endeavours under alias Captain Murphy - Stephen Ellison has been significant in warping the edges of the rap instrumental.

While many of his own productions don't sit entirely comfortably as rap tracks - or indeed with any genre - the beat scene which Flying Lotus helped to foster has had a huge influence over the LA underground.

Take Odd Future, for example, who FlyLo has not only produced for himself but had a clear influence on with his jazz leanings and brazen low-end. As rap production continues to follow more experimental paths, Ellison's influence will only become more apparent in years to come.

If Chief Keef has so far been the face Chicago's Drill scene, sitting in the engine room is twenty year-old producer Young Chop.

His early productions for Keef - I Don't Like, 3Hunna and Love Sosa - quickly caught the attention of those outside the city, and the sheer grandiosity of Chop's sound has put him in high demand.

Like so many others, Young Chop is working from Lex Luger's blueprint of hard and heavy synth anthems with hi-hats galore, but he's also got an ear for melody and is not afraid to show his playful side. This variation will be crucial to Chop's future success, as he applies the wrecking-ball power of his early hits to even newer sounds and ideas.

It's been an oddly quiet 2013 for New Jersey's Clams Casino, considering the huge momentum that he managed to build in the two years previous. Even so, his influence over the internet rap game has been massive, single-handedly inspiring a legion of bedroom producers with the hazy cloud rap of songs like Lil B's 'I'm God' and A$AP Rocky's 'Wassup'.

Clams is from a generation of producers who are very much the product of growing up online, surrounding himself with a myriad of styles from an early age - just as likely to sample Imogen Heap as he is a gunshot. Almost all of his beats are fed through the same drowsy, codeine filter, as sounds become stretched and screwed under his carefully crafted aesthetic.

Whatever you make of Odd Future's bratty, infantile frontman Tyler, The Creator, get him behind the boards and you'll see a very different side to his character.

While his beats during the first wave of Odd Future tapes were noisy, obnoxious reflections of the group's lyrical nastiness, he's since refined his sound with a more obvious melodic thread and explicit references to vintage Neptunes.

Tyler's drum patterns are confidently simple, allowing room for him to play around with a range of live instruments - referencing everything from John Carpenter to lounge jazz (lots and lots of lounge jazz in fact, in the best way possible). As refreshing as his early beats were at the time, the production on his latest album - Wolf—hints at greater mainstream subversions in the near future.