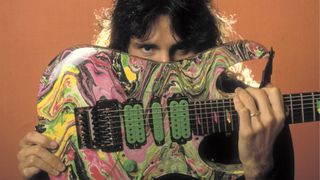 When it comes to being ahead of his time, and indeed most other guitar players, Steve Vai doesn't have much left to prove. But as he reflects on his brief tenure in David Coverdale's Whitesnake 30 years on from the only record he made with the band, he's pointed out a very notable trail that he blazed in seven-string guitar as the first player to use it across a rock album.

"David [Coverdale] was, you know, he seemed very happy with the parts and what I was doing," Vai told Whitesnake TV in a new interview clip about Slip Of The Tongue. "I was layering things and there's so many guitar parts on that Whitesnake record. I mean, we worked hard, really hard on that.

"And it's not conventional, traditional kind of European rock-blues guitar playing, so I got to hand it to David for having the courage to hire someone like me, but I think it worked out really great, I loved the record.

"As a matter of fact, there's something very interesting about that record. That's when I got the first seven-string guitar, you know? I was with Ibanez, I had the Jem and then I asked them to make a Jem with a seventh string.

More on the Ibanez Jem

Steve Vai tells the story of the Ibanez Jem

"Little did I know this subculture that it was going to create, you know? [Chuckles] That was another one of those just simply innocent things where I didn't set out to...  I wasn't sitting, going, 'This is gonna change the world. I'm gonna make a lot of money, this is gonna be great!'

"I just thought, 'Wow, it would be really cool to have a seventh string, you know, tune it down.' And they said, 'Okay.' I mean, the conversation lasted, like, a minute.

"And they made me this guitar and I got it and I took the first prototype and I recorded the whole Whitesnake [album] - not one song I didn't use it."

"So that record, if you listen, that's the first rock record that has a seven-string guitar throughout the whole thing. A little bit of trivia for you. And later on, obviously, I knew that there was gonna be these new young players that were going to come along and really make a difference with that guitar, and they did."

Players including Korn's James 'Munky' Shaffer and Brian 'Head' Welch would go on to utilise Ibanez seven-strings for the dropped tunings that would prove a signature for what would be called nu metal. But Vai got there first and paved the way with the guitar company for the wealth of extended range guitars we see available today.