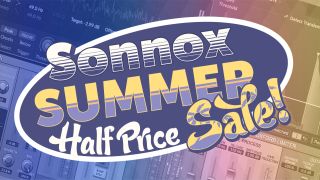 It’s a mark of their quality that Sonnox’s plugins have long been favoured by professional producers. In fact - and quite remarkably - they’ve played a role in the creation of eight of the top ten best-selling records of the 21st century. What’s more, you’ll have heard Sonnox processing being used in countless movies, TV shows, live performances and games.

That said, one of the hallmarks of the Sonnox plugins is their sonic transparency. Whereas some developers fall over themselves to describe the ‘colour’, ‘character’ and ‘warmth’ of their processors, the Sonnox range - which includes the likes of EQs, dynamics processors, reverb and audio clean-up tools - is all about precision and maintaining sonic integrity.

All of which makes us pleased to report that, right now, you can save 50% on pretty much the entire catalogue of Sonnox products in the company’s Summer Sale. Unlike some developers, Sonnox only runs two such promotions a year, so right now you’ve got a rare chance to pick up some pro-quality plugins at bargain prices.

One of these is the Oxford Drum Gate. Released last year and the fastest-selling plugin in Sonnox’s history, this has never previously been on sale at this level of discount. Thanks to intelligent drum hit detection, this makes it easy to remove the parts of your drum track that you don’t want but keep the sounds that you do.

The Summer Sale means that, until 6 July, you’ve got the chance to get your hands on the Drum Gate and many other highly-regarded processors at massively reduced prices. These may be professional tools but, as you’ll quickly discover, they’re equally well-suited to your home studio, and could prove to be the missing piece in your production setup.

Find out more and start saving on the Sonnox website.