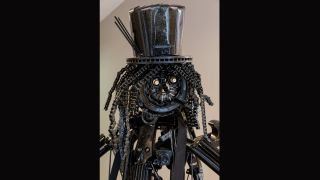 It’s debatable whether Slash should be considered a metal guitarist, but a new 8ft sculpture of the Guns N’ Roses man definitely is.

Made entirely from scrapped car and bike metal - along with a few discarded instrument parts - the sculpture took around 12 days to create and bears Slash’s signature. It even features one of his signature Gibson guitars.

It’s the creation of Simon Weitzman and Darren Kenny, founders of Heavy Metal Sculptures, and is set to go on display at the British Music Experience in Liverpool from 21 October.