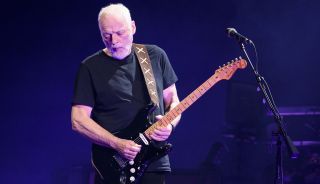 It was wall to wall legends at the London Palladium last night (Feb 25) to celebrate the legacy of early Fleetwood Mac amd Peter Green, and they don't get much bigger in the guitar world than David Gilmour.

Footage has begun to surface from the night including Gilmour's turn on lap steel for Albatross and his lead guitar turn on Fleetwood Mac classic Oh Well Pt 2.

Check it all out below.

Man Of The World with Neil Finn

Stop Messin' Around with Christine McVie and Steven Tyler

Shake Your Money Maker with all star cast including Pete Townshend