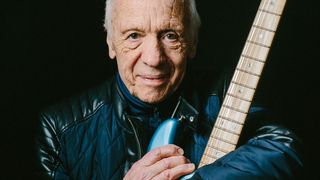 The British blues-rock legend - who formed Procol Harum in 1967, leaving four years and five albums later to embark on an illustrious solo career - says the new music came from the realisation that there was more behind him than ahead.

As solemn the admission of time running short may sound, the guitarist/singer feels its title track is also him telling himself, “If you want to achieve something, then you’ll just have to work even harder.”

The 12 tracks on his latest offering definitely carry that thrill of achievement - every note on his signature Strat ringing with a power and truth few have ever come close to...

“I definitely try to capture performances,” he says, from a sofa in Fender UK’s showroom on a warm summer afternoon. “Every song has to feel like it was special... as if we’d recorded a happening. It is manufactured to a certain degree, so I recorded a lot of guitar and drums together to give it that feel - and then added things after.

“On other tracks, I’d put my guitars down to programmed drums and built it up from there. But the point was always to make it feel like there was something real going on.”

As typified by 1974 solo hit Bridge Of Sighs on which he famously used a Uni-Vibe, there’s a heavy wash of modulation on the guitars - a glowing warmth that pulsates within his tasteful blues.

As per his preference in more recent years, that all came down to the Fulltone Deja Vibe by his feet...

“It’s the closest you can get to the original Uni-Vibe,” notes Trower. “It’s a lot cleaner, too - the original one had a hiss to it. Mike Fuller makes those Fulltone pedals and he’s gotten very close to that Uni-Vibe feeling.

“I also have my signature overdrive - all Fulltone; everything I use is made by him - plus the Clyde wah and another pedal he built for me. It’s a wah that has a volume control - he calls it a WahFull. I have it set at certain points for more nasal sweeps at points. You can hear it on the solos for the title track.”

The signal was then fed into his Marshall amps, either a 100-watt Vintage Modern or a combination of a JCM800 reissue and a Bluesbreaker, “which didn’t go through its own speaker but actually another 2x12 with Vintage 30s”.

A big part of his sonic identity, he says, also comes from blending microphones up-close and further away for a more natural room sound that lacks little in warmth and depth. This is key to finding a tone that well and truly breathes...

“That’s the reason why Bridge Of Sighs came out as such a big noise,” explains Trower.

“Our engineer Geoff Emerick [who famously worked closely with The Beatles from the mid-'60s] came up with the idea of putting mics down the room to pick up ambient noise as well as having them quite close. I think he used U87s if I remember correctly.

“My band had already been playing that song live, so it already had a good sense of itself before we went into the studio. It was just a matter of recording it happening.”

1. Use guitars that sound good unplugged

“I honestly think this is very important. Electric guitars that get amplified need to sound strong acoustically to start with. I eventually ended up tuning a tone down and using heavier strings on the E and B, plus very high action to really help it ring. You need a resonance out of the strings, even if you’re playing up high.

“Most guitars won’t any have any of that; they’ll most likely make plinky-plunky noises when you go high up. That’s got to be tip number one - and when you buy anything make sure it has that sweet sound before going into an amp. There are all these different bits of wood out there - remember, they don’t all have that magic!

“I use 12s on top which is hard enough work as it is, never mind the 13s Stevie Ray Vaughan was using. I only ever play my signature model Strats - there were maybe two or three used for the whole album. One of them is fairly new. They’re all built in the Custom Shop and I tend to get one every couple of years.”

“Strats can sometimes be the hardest electric guitars to get a big sound out of. Part of the reason I ask them to build me the ones with the bigger headstock is because in my mind a bit more wood in the neck will lead into more resonance. All those things feed into it.

“I’m very keen on the vintage saddles as well - no other saddles sound quite right on a Strat. Those cast ones give the guitar these strange overtones that you just wouldn’t get out of the modern ones... that’s all part of the guitar’s character and voice.”

2. Experiment with your pedals

“Originally in the '70s, I used to put my drive into the Uni-Vibe. Bridge Of Sighs would have been done like that. Back then, there weren’t many overdrives like there are now. I had a guy building me a signal boost to make my guitar louder, so most of that overdrive came from those amps being cranked.

“You can create anything now with pedals, but back in those days you really had to work it! I did use the Fuzz Face for a bit... funnily enough, hardly ever with it on. But what it did to the sound when it was switched off was great! It would smooth things out and make them a little fatter. I might have used the fuzz early on, maybe around my first solo album, but I used it more on off!

“Then I got into using a Watkins Copicat front-end to smooth things out and warm up... all sorts of weird things like that. In Procol Harum, I had this practice amp made by Selmer called their Little Giant, I would put my guitar through that and from the speaker terminals plug it into an amp.

“That was my first overdrive. You couldn’t turn it up too much because the valves would feed back and whistle! That Little Giant into a Fender amp is probably the main sound for the early Procol Harum stuff.

“Now my vibe goes in front, before everything - even my Boss tuner - which I prefer to put at the end of the line. Mike at Fulltone told me to put it at the end of the line because there’s a high-pitched note in that tuner and it gets amplified. So my signal chain goes from the Deja Vibe to the wah and then the overdrive before the amp.”

3. Don’t just copy everyone else

“It’s important when you’re learning - though I had heroes like BB King - to remember there’s a lot more to it than learning your favourite player’s licks. That might actually stop you from finding your own thing.

“It’s hard work to start from scratch and develop your own music and style. I’ve got a feeling - and I may be wrong - that if you learn too much of someone else’s material, you might be stunting your own growth. You might be able to play your hero’s licks, but it may end up taking longer for your own music to come through.

“I don’t think vibrato is something that can be taught. You can’t really practise it. I think it’s there for emotional expression; it’s not really a technical thing.

“I started developing mine right from the first album. Say if you add vibrato to a bent up note - which I do a lot - you should be doing it to add something emotionally and from the heart. It shouldn’t be a case of always adding vibrato to those notes... actually sometimes just holding a note can be beautiful. That’s why you have to be open to your own creativity.

“What do you feel when you hit that note? Do you want to add a little something to it or hold it and let it ring? That can only come from within. I don’t think your head alone can tell you that.

“Repeating what other guitarists have done is not your emotion... it’s someone else’s! You should let yourself flow into what you’re doing than just thinking with your head. Remember you are trying to create music - it’s a very deep thing and great music tends to come from people with a lot of heart.”

“I wouldn’t call myself a technical player and I don’t know anything about scales, though my technique is good. There’s not a myriad of things going on.

“When I’m playing leads, every note has to mean something. That’s where I’m at now. A long time ago, I wasn’t thinking like that - it would be more like a run followed by something. Now that emotional something has to be on every note.

“Consequently, I find myself playing less notes! Every note should have impact. Fast runs with a flurry of notes can be effective... but where I’m at now is different.

“Listen to BB King or Albert King play and every note will have weight and emotional power to it. If they played more it might not have the same effect. I only saw him once but Albert was the best player I’ve ever seen... just soul power. Everything he did was pure power. The way he was bending, on a guitar strung upside down the wrong way round, was almost unfathomable. You couldn’t really work out where it was coming from or going to - but you could sing every lick he played.

“Someone once told me that Albert King was the only guitarist Jimi Hendrix was frightened of. When he did the Stevie Ray Vaughan jams, he was probably past his best, but when he was young and in his pomp, that guy was spectacular.”

5. Play what’s right for the music

“Ultimately, my main gift as a guitar player is being able to play something compositionally right for each piece. I always wanted to have the sense of my parts fitting - not just bringing in licks I’d already worked out to plonk down into a track. I’d rather create something right for that specific piece... even if it generally comes down to the blues scale most of the time.

“It ties in with what I was saying about Albert King - his parts had this beautiful sense of composition which put him closer to the great jazz players, being able to perform freeform but also improvising as part of what’s already there.

“I don’t think there was a moment where how to apply my guitar started making sense; my whole thing was a more gradual development. I started off in Procol Harum by having an idea of what I wanted to do but I don’t think it was until later that I was able to get to it.

“Lead guitarists should remember the fills have to be part of the composition, otherwise they won’t have that potency. You can’t just throw your favourite licks in; they have to belong and fit within the overall music.”