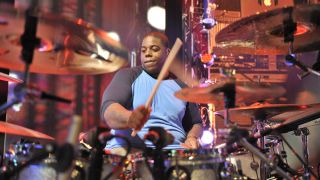 Another huge name has been announced for this year’s London Drum Show, with Aaron Spears joining the already-stellar line-up.

Spears, whose credits include Ariana Grande and Usher, will perform on the Main Stage at 3PM on Sunday 12 November in association with Zildjian. He will also engage in a Q&A session on Saturday 11 November at 2PM. He joins Jimmy Chamberlin, Andy Gangadeen, Kaz Rodriguez, Steve White, Ian Palmer, Jim Riley, Anika Nilles, Mike Clark, Louise Bartle and Matty Brown on the bill.

“The London Drum Show will always stand out in my mind as one of my favourite drum festivals because of the passion of the people who attend,” Spears said on being added to the show. The energy level in the halls, at the different booths and in the performance auditorium registered right off the scale at about an 11...I'm really looking forward to returning again this year to share and also excited to learn from some of the other amazing musicians that will be performing during LDS! It is going to be EPIC!”

For a taster of what you can expect on the day, check out Aaron blazing through 7 To The Power of 6 (a track written by fellow LDS 2017 performer Kaz Rodriguez) in the video below.

Not bad, right? We hear that Aaron and Kaz have something special up their sleeves set to go down during the latter's London Drum Show performance. That will be one not to be missed, for sure.

The London Drum Show takes place on 11 and 12 November at Olympia in London, and just in case that stunning artist line-up wasn’t enough, there’s plenty more going on across the weekend.

We’re talking the biggest brands from the drum world showcasing their latest gear. Tama, Zildjian, Roland, Natal, the British Drum Company, Ahead and Istanbul AGOP are just a handful of the names confirmed to appear. For a full list keep an eye on www.londondrumshow.com. That is also the place to order your tickets for London Drum Show 2017. Day and full weekend tickets are available, priced between £15 and £32.50. Tickets for Aaron's Main Stage performance are £5 if you want to guarantee entry, but as always there will be a free allocation given out an hour before his performance on a first come first served basis. This will be a popular performance so don't miss out!