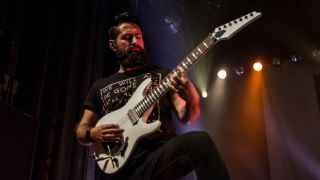 Jake Bowen’s playing might be preternaturally taut, an unerring component of a Periphery sound that bends heavy metal into all kinds of new and unearthly shapes, but there’s nothing alien about it.

He is at pains to dispel any such notion that he has been modded, quartz crystal implants inserted at the base of his cerebral cortex to juice his legato. Hell no. “It’s powered by lots and lots of coffee!” he protests. Moreover, there’s nothing extra-terrestrial about any of us, he says. We are just animals marooned on a rock that’s floating through space.

And that’s why we should keep a sense of perspective. Sure, Bowen invites criticism by virtue of existing in the public eye, and intensifies it by playing a tech-forward style that’s picked over forensically by its audience, and that’s helpful in keeping us grounded. But don’t take it too seriously. There are bigger things at play.

Those bigger things might be what’s driving the tone on Periphery’s sixth studio album, Periphery IV - Hail Stan. It’s a darker record, melodically and lyrically. Is it borne of the hyper-tension and negativity that’s dividing our present moment?

“Yeah, I think that might have something to do with it, even unintentionally,” he says. “Everybody seems a lot more angry. It seems like the world is gravitating towards nationalism and authoritarianism... But it’s not the reason.”

No. Periphery’s process seems too organic to build a record around one emotion, one preoccupation. Everyone contributes. Often no-one knows where a song is going until they workshop it. Take Reptile, the 17-minute epic that opens the new record. That just started with a riff, a couple of riffs, and those begat more riffs.

The song is only done when it feels like it’s done. As Bowen says, it’s unspoken. But then a lot of this guitar playing business is unspoken. It’s all in the head. As Funkadelic said, free your mind and your ass will follow. Bowen might be proof, if needed, that they were right.

Originally, he wanted to sit out the writing process, but a pep talk from Holcomb got his head back in the game. The ideas soon started coming. And that leads us to his first tip...

1. Stuck in a rut? Don’t worry, your creativity will return

“The biggest thing I learned [making the album] was that when you are in a rut, or you are not feeling creative, it is in there. It is always in there. It’s just up to you to discover the potential and learn how to harness it under pressure, and I think that’s the thing that there is no scientific answer for.

“I listen to a lot of electronic music, so I tend to go down that rabbit hole on Spotify and try to find new artists that inspire me. But just being outside, hiking, hanging out with my dog, and just walking around where I live and doing things outdoors really helps clear my head, and it makes me feel - this is gonna make me sound really new age - more connected to the world than any of this [smartphone] shit.

2. Don’t get too hung up on what other people think

“We are in the age of the unsolicited opinion and everybody wants to be heard. I think it is just a reaction to the fact that these phones and social media are just reflections of the fact that we don’t have any control, and that we are lost in a sea of opinion.

“This is gonna sound a bit nihilistic, but [we should] remember that we are all just creatures, that we are animals growing on a rock, floating through space. Really, nothing we do is very important in the grand scheme of things, so to take somebody’s feedback to heart and really let it eat away at your essence - I guess that’s the best way to put it - is just not worth your time and it’ll just distract you from doing what you want to do.

“I’m not saying that you shouldn’t listen. Like, definitely listen. It’s a barometer. Because you are only in your own mind, and you are only really influenced by the people around you, it’s good to have a different perspective. It’s healthy. But it’s not healthy to obsess over it.

“We do have an element to our sound that is of a technical nature, so when you have that element you tend to draw people who will appreciate that element, and those people are very discerning customers; if you are not on your game 100 per cent at all times they are going to take notice and they are going to comment about it on the internet, and that feedback gets back to you and it harms the ego, and it makes you really think about what you are doing.

“Not to say that we take all that feedback and it’s messing with us all the time - it’s not - but we definitely do keep our finger on the pulse.”

3. You’ve got to learn to relax

“Being in a band is a form of self-abuse! [Laughs] I need to relax more. I need to take more deep, full breaths. I need to relax my shoulders. I need to realise that not everything needs to be done perfectly every time - not that I ever strive for perfection but it’s something that is on my mind, like I want things to go right all the time, and I just think that’s an unrealistic expectation of anything.

“I try to not take things too seriously lately. Personally, that’s what I would say to my former self if I ever ran into that asshole. ‘Dude, it’s gonna be okay. Just relax.’ I don’t think I would listen to myself, either. I’d be like, ‘Oh, right, buddy. Whatever.’ But I just think there is an ebb and flow to these things.

4. Save your money and get the best gear you can afford

“I remember growing up and a lot of people were like, ‘Oh, you don’t need expensive gear to learn how to play. You need to practise.’ And I disagree with that notion, because I’ll be more inclined to practise if I am really enjoying what I am practising with. It’s just the way that I feel about it.

“I think that experimentation is a really important part of developing your everything! And it comes at a monetary cost. My solution isn’t on the surface an economical one, because my solution is quite expensive, and it’s the reason why I use the Fractal Axe-Fx. I use it in the studio, we use it live, everything.

“It packs so much - everything you could ever dream about in a guitar sense, or even in just a preamp, effects, whatever. It also has guitar modelling. It just has so much, and even at its price tag, it’s still the greatest value for the money!

“I know there’s this eagerness and you wanna get started right away, and to just say, ‘Oh, well if I get something cheaper then I can have it now.’ I think you are doing yourself a disservice by not getting something like an Axe-Fx, because the Axe-Fx just has so much. You can experiment with anything that you could dream of; anything that you see online you can recreate it with the Axe-Fx, and in just putting in a little extra effort into saving for it, or figuring out a way to attain one, is an enormous shortcut.

“When I got my first Axe-Fx, in 2010 or so, I just stopped caring about any other gear because with the constant updates, the firmware updates, and just how easy it is to get into the nuance of creating tones and sounds, I’m just like, ‘This is it!’ This is what people have been waiting for in terms of something that does it all.”

5. Learn to play your tone and go easy on the gain

“You know, a lot of people, they hear the players they like and they want to emulate them, and they’re like, ‘Okay, this player uses a Dual Rectifier with some delay, and maybe a compressor, and some other things.’ And what that does is, well, the compressor will even out your volume and it’ll make the attack the same so that your legato pops out more without having to really fine-tune it, and then the delay will cover up your missing notes and that will also improve your legato. So if you go to a different amp with less gain and less compression, and not as wet a delay, you can actually hear what your playing sounds like, and I think that’s how you start to understand how to get surgical with developing yourself.

“I take a less is more approach. I don’t really like that term ‘less is more’. I feel like it’s kind of like a crutch term but for this sake and the sake of this discussion I really do believe in it. Because the thing about gain is that the more you have, the more frequencies you are introducing into whatever mix you are playing. Having less gain allows for more space in your mix, for the other instruments to have their space in the mix, and it forces you to really scrutinise your playing so that you are playing accurately and with good finger tone, and evenly.

“I think that’s something to consider when you are dialling in a tone; see how little gain you can get away with rather than how much.”

Periphery IV: Hail Stan is out on 5 April via 3DOT Recordings.