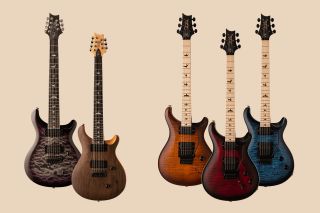 Hot on the heels of celebrating its 35th anniversary with six new SE models for 2020 PRS has unveiled two SE signatures for its artists from the progressive metal world; Periphery’s Mark Holcomb and Between The Buried And Me’s Dustie Waring.

"My SE SVN has become the perfect counterpart to my SE six-string, and an absolute mainstay in Periphery's live rig,” says Holcomb. “It's designed to be aggressive, but its core features allow it to be diverse enough to handle clean and mid-gain tones just as effectively. If you've played my SE six, you'll find that this builds off what we established with that guitar and more."

Another versatile metal player getting his SE dues is Dustie Waring, eight albums into his career with Between The Buried And Me, his DW CE 24 Floyd model is a PRS CE bolt-on construction with a satin-finished maple neck, maple fretboard and a slightly modified Pattern Thin neck carve to Waring’s carve spec that is slightly thinner front to back. It’s not surprising that the DW CE 24 Floyd also features a Floyd Rose tremolo system too – hence its name!

Like the Holcomb model, the pickups here are from a third party with Waring’s signature Mojotone DW Tomahawk humbuckers. They’re made with a blend of Ceramic and Alnico magnets and a special winding technique to offer high output with a big bottom end with articulation and clarity.

The volume, tone and five-way blade pickup selector have been shifted slightly to allow more space for players to comfortably work that Floyd Rose trem. The DW CE 24 Floyd is topped with sleek satin black hardware and is available in four color options, including Waring’s signature finish: Waring Burst.

“This model has been the most stable, pleasure-to-play instrument I’ve ever had,” says Waring. “I’ve put it through the paces, and it’s made me proud to have my name on it.”

For more info check out the PRS Guitars site.