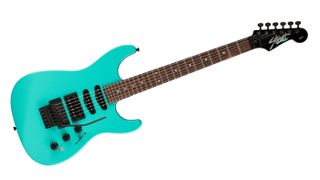 NAMM 2020: Fender is adding a splash of neon colour to its new year range, in the form of the shred-focussed Limited Edition HM Strat.

The original HM was created in response to the late-80s 'Super Strat' phenomenon, which resulted in a crop of rival builders encroaching on Fender's turf. Available from 1988 to 1992, the HM offered shredheads the choice of a Fender-made speed machine and was known for its unusual 25" scale-length and the almost offensively-80s 'Strat' logo on the headstock.

Retro-nuts will be pleased to see that logo once again displayed with pride on the new HM Strat Limited Edition, while it also features the basswood body, HSS pickup configuration,  25" scale-length, 24 jumbo frets, 'F' logo knobs and Gotoh tuners of the original model, all of which made the original so controversial in the eyes of Strat purists.

This is not an exhaustive recreation, though, as there is now a Floyd Rose Special bridge, in place of the original's Kahler Spyder (which was licensed from Floyd Rose in the first place) and Fender has opted to use its own humbuckers, instead of the DiMarzios found in the 80s/90s runs.

The HM was relatively short-lived (or, as Fender put it, quickly became a "cult classic"), but offered further proof of just how flexible and enduring the Strat build would be. Reviving it, albeit temporarily, is an interesting move for Fender, given the mega-brand now owns the likes of Charvel and Jackson – the brands that the HM Strat was meant to beat at their own game, but we remain suckers for a neon finish...

The new Fender Limited Edition HM Strat is offered in Bright White, Ice Blue, Flash Pink and Frozen Yellow and has an MSRP of $1,199.99.