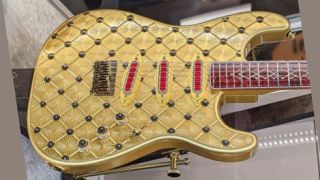 NAMM 2020: Fender's Custom Shop stand is always a NAMM highlight, and its Prestige Collection is usually the jewel in the Big F's crowd-pleasing crown.

This year is no exception, with the astonishing collection, which comprises money-no-object creations autered by individual master builders, set to draw huge crowds in Anaheim.

So, without further ado, put your bank manager on speed dial and feast your eyes, as we run through the Prestige Collection, in Fender Custom Shop's own words.

Yuriy Shishkov’s Coronation Stratocaster is inspired by the Coronation Egg made in 1897 to commemorate the inauguration of Tsar Nicholas II and Tsarina Alexandra on an Imperial throne.

Given its historical significance, Shishkov says this is the most famous and most valuable egg created and was even a part of a heist plot in the popular movie Oceans 12. The guitar design includes a gold leafed surface with an “on-wood” Guilloche and gilded silver artwork.

It also features custom fabricated diamond eagle medallions, along with hundreds of diamonds throughout the instrument. The neck has distinct “trellises” with diamond patterns found on the egg’s “hidden surprise” coach.

The Coronation Stratocaster comes with an authentic LTD Edition vintage recreation of the Coronation Egg. After 16 months of work, this has become Shishkov’s “most complicated and intriguing project” to-date, he says.

Acclaimed for building high-performance guitars even before his arrival at Fender, Master Builder Ron Thorn has always loved fast cars. Struck by the similarities in sleek design and high-performance between the Fender Stratocaster guitar and the Saleen 1 super sports car, Thorn conceived of a one-of-a-kind Stratocaster combining elements of both.

The result is the Stratocaster 1. This supercharged guitar is finished in striking Saleen Candy Apple Red. Its hand-laid carbon-fiber body is hollow for super-lightweight, with a roasted alder centre block and a hand-carved maple top. Its quartersawn roasted maple neck has a 12” radius carbon fibre round-lam fingerboard with medium jumbo frets, topped off with a matching carbon fibre headstock overlay.

John Cruz’s Custom Griffin Themed Leather carved and covered 612 Doubleneck Tele is a custom-themed guitar that has never been created before. In addition to a 612 Doubleneck feature, the guitar also features painted artwork with a 3D effect.

“I wanted to create something that looked beautiful, but also be totally playable and sound amazing,” he says. “This guitar is for anyone who dares to be different.”

Greg Fessler’s Boutique Telecaster celebrates the 70th anniversary of the esteemed model. As he mapped out the concept for the guitar, he was focused on showcasing beautiful figured wood but used in a “boutique” version of a Telecaster.

The Argyle Telecaster by Dennis Galuszka

Dennis Galuszka’s The Argyle Telecaster was conceived in collaboration with virtuoso Fender painter Jay Nelson. Designed to bring out anyone’s internal hipster, this Telecaster features a sparkle paint job along with an argyle pattern.

“We have an amazing in-house painter in Jay and I am a total sucker for sparkle paint jobs and patterns within a sparkle,” he says.

Todd Krause’s Swagger guitar is based on the Fender “Swinger,” but takes on a different name due to the various changes he applied to the model. Krause used roasted figured maple for the neck and gave the headstock the same curves as the body.

The guitar also features a full 25.5” scale length, a custom bridge, custom top mount and high output silver foil pickups from Curtis Novak. “This is a great guitar for a Swinger collector or collectors looking for something a little different,” Krause says.

Carlos Lopez’ Sugar Skull Strat is entirely painted by esteemed artist Pamelina. As Lopez created the guitar, the building part was secondary to the painting, which transforms this instrument into a work of art.

“When I was an apprentice, I told myself I was going to work with Pamelina when I became a Master Builder. I hope this guitar will remind everyone that we are more than just guitar builders.”

Kyle McMillin’s The Beaulieu Vineyard Tele is made from reclaimed wood from the wine barrels of the vineyard of its namesake. Through the decades, the barrel wood developed a natural red stain from the wine that was made within it.

To showcase the old wood and its character, McMillin finished the guitar off with a super thin permalac finish. Unique and elegantly simple, the Telecaster also features cork knobs and tarnished raw hardware, as well as a Twisted Tele neck pickup and a Broadcaster bridge pickup.

Jason Smith’s India Garden Esquire is a collaboration with Pyrography artist Madeline Hanlon, whose beautiful, detailed wood burning design is displayed on the guitar. As Smith design his Prestige creation, he pulled inspiration from the 70th Anniversary of the Esquire guitar, as well as floral prints found on tapestries and clothing of India for the artwork.

There’s a simplicity to the overall design - from the lack of fretboard markers on the highly figured birdseye neck, to the single pickup and simplistic volume and tone control layout.

Paul Waller’s Carved Top Telecaster is a semi-hollow, double “F” hole Telecaster made from swamp ash and a book matched quilted maple top. The custom-made Curtis Novak P-90 style pickups are covered in tortoise, which is accentuated by the tortoise double bound body.

Dale Wilson’s Tamo Ash Esquire was inspired by a piece of Tamo Ash wood he saved years ago for a special project.

“The figuring on this piece of Tamo Ash was incredible, and I’m a sucker for a Honey Burst paint job,” he says. Wilson was determined to showcase the beauty and simplicity of the Fender Esquire with this showpiece.