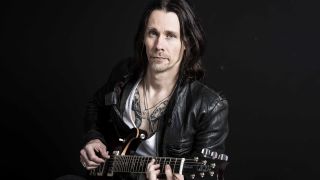 MusicRadar's best of 2018: He’s the frontman with the remarkable voice in Alter Bridge, and with Slash he’s played arenas and stadiums, but Myles Kennedy’s first passion was the guitar.

As a teenager, he studied jazz, playing in a fusion band and would later teach guitar in his home city of Spokane, as well as fronting and recording two albums with The Mayfield Four. He remains a dedicated and passionate student of the instrument.

If people haven’t caught on to his talents as a player alongside Mark Tremonti in Alter Bridge yet, his long-awaited debut solo album Year Of The Tiger proves his versatility beyond doubt. It finds Kennedy exploring his roots, both personally and musically, on a record that switches gear into the acoustic realm with folk, delta blues and even rockabilly in the mix.

The title of the record reflects the year of 1974 when the four-year-old Kennedy lost his father. A Christian Scientist, his belief in faith as a healer rather than medicine would lead to his untimely passing. The album charts the emotions that are clearly still raw for Myles as he reflects on the loss and aftermath - and it’s something that has often echoed through his art.

“I tried to touch on this before but for a number of reasons, I could never go there,” Myles admits.

“Obviously it’s a painful subject and a tough subject. And death is a theme that runs through many of the lyrics I’ve been involved in writing. It’s something that happened at a young age, so set the stage for the well I would continually draw from. But as far as doing an entire record devoted to this specific event, I could never pull it off before. But it just felt like the right time, and here we are.”

That it’s an album full of light and hope amongst the obvious darkness is testament to Myles’ songwriting and vision for the project, but it’s also sonically surprising.

He played lap steel for the first time in the studio, contributing the emotive climax that is Love Can Only Heal’s solo. Devil On The Wall swings with country swagger and the rich influences of the blues, and Zeppelin’s folky unplugged side weaves throughout.

As Myles gets ready to head out on the road for this compelling new chapter in his guitar story, it seems like a good time to ask him to share some of the lessons he’s learned so far. And he was happy to help…

“Sometimes certain tunings really inspire you. I believe on Songbird from this album I’m using a Nick Drake tuning. There’s such a beautiful melancholy to what Nick Drake captured as an artist, and I felt it would be necessary to tap into as an artist.

“And there’s a few new tunings for me on this record. The Great Beyond and Nothing But A Name was a tuning I just stumbled on to. Basically taking that Nick Drake tuning and lowering the E tuning a half step. That made it very dark, and the minute I started fooling around with that, it was hard not to come up with ideas.

“Blind Faith was a tuning I’ve used a fair amount with Alter Bridge: DADADD. Ghost Of Shangri La was CGCGCD. There were a lot of C tunings which I hadn’t experimented a ton with in the past, but I felt like it was a good source of inspiration for me.

“I’ve been writing long enough where you fall into your shapes and your patterns. There starts to be a thing that you do on a regular basis, which is fine, but it’s also good to force yourself out of those comfort zones.

“I feel that is one of the biggest advantages of experimenting with tunings. Just with a twist of your tuning peg, it can open up an entire different world to you, and in a lot of ways it can make it feel like an entirely new instrument. That’s something I really love as a writer, having that opportunity.”

“When I originally started trying to figure out what I was going to do as a young guitar player, the idea of being a session player really intrigued me. This is when the industry was different and there was much more of a calling for that kind of thing, before the advent of Pro Tools… so much has shifted.

“Really great studio players that could play a number of different styles were in demand back then and so for me, if I was going to do that, I had to embrace a lot of different styles of music to try and understand what I would need to do in those environments. But I found as I did that it really opened my mind and I grew to really love these genres I never would have been exposed to [otherwise].

“It was kind of like the same feeling I had when I discovered sushi. Initially living in Spokane there were certain things you would eat and you weren’t exposed to other things, sushi being one of them. So the first time I had sushi it was such an eye-opening experience. That’s kind of how I felt the first time I listened to bluegrass. It was a great piece of toro! It was like, this tastes really good to my earhole!”

“Repetition more than anything helps with the skill of playing and singing. Riffs especially can be tough. Turning on a metronome, doing it over and over. But first things first, make sure you have the musical foundation down.

“It’s definitely a daunting task and you may find yourself saying, ‘There’s never going to be a way I’m going to do this.’ But trust me, if I can do it, you can do it, because it’s something I really had to work at and develop. It’s like with anything; ultimately repetition and practice is what will get you there, so just be patient.”

4. Develop your ear for slide playing

“For me, using slide was really about developing my ear. The thing with slide is your sense of pitch has to be intact. Because you don’t have the benefit of fretting the note, so if you overshoot it or undershoot it it’s going to be flat or sharp. You really have to develop that and that takes time.

“One of the tips I would say to someone who has never played slide is make sure your action isn’t too low, because that will definitely hinder the process and it will essentially fret out. So maybe have a guitar especially set up for the slide that you can practise on.

“I think one of the things that was good for me early on is I started messing around with open D and G tunings. That’s when you feel like you’re making gains than if you’re using standard tuning on the slide, because just moving the slide up to the fifth or the seventh fret, you play in an open D, then you go up to the fifth fret and now you have the four chord and the five chord on the seventh fret. I remember that was pretty liberating for me initially, because I felt like I was making gains a little quicker.

“Ian Thornley [Big Wreck] is a friend of mine, and I actually learned a fair amount of my slide feel from watching him when we used to tour together back in the day. Ian is an incredible slide player, mindblowingly good actually, and his vibrato and his phrasing was certainly something that rubbed off to a point on me. He’s brilliant.”

5. The stage is where you really learn

“I’ll never forget when I’d just completed two years of training at a community college. I was studying night and day, and trying to gig to play as much as possible. I had a guitar with me at least 12 hours a day, and that was really important to me.

“But when my real training started was right after I got out of school and I got a really great gig in a cover band. We’d play a jazz set from 7-8 and then from 8 until 1 in the morning we played these R&B cover songs, and some really bad pop as well.

“Nonetheless, I was on stage at least five nights a week. And I remember the sax player came in and he was a little older, and it was kind of a big deal because he’d studied at Berkley. And that was my dream. I’d love to either study at Berkley or GIT, one of these schools.

“But I remember he said to me, ‘Do you know what? What you’re doing now is really the greatest education you can get. Yes, you can learn some really great things at those schools, but to get up night after night and be thrown to the wolves and a trial by fire, that’s what’s going to help you advance the most.’ And I really feel like he was right.”