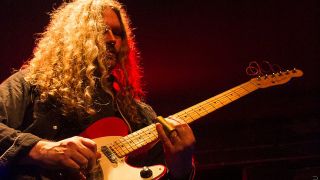 “I didn’t really bring anything with me!” reveals Nebraska-born guitarist Michael Lee Firkins, when asked what equipment he’s been using on his most recent European run.

“I just showed up and got endorsed by Koch Amplifiers, who set me up with a bunch of cool equipment that all sounds really good! I had only used their stuff before once, I really liked it and carried on talking to them. Right now, I’m pretty much using the clean channels with some pedals in front of it. Those amps nail that Twin tone… they really kick ass!”

All the guitarist needed on this run was three guitars - only two of which got used - and his pedalboard. Perhaps unsurprisingly, the guitarist placed his trust in Fender instruments to nail that tone in his quest for countrified rock…

“I have my customised Tele that a friend helped me build, with a resonator inside of it,” he continues. “That’s for all the slide stuff that I do, plus I have my Custom Shop Strat and a Road Worn Strat. I’ve been using my Road Worn for pratically the whole tour - the Custom Shop one took a dump thanks to the airlines. The weather twisted the neck and it showed up all frankensteined out. I had planned to use the Road Worn more anyway… it was has 11-gauge strings on it that play like slinky 10s.

“It’s an amazing guitar. I put a Seymour Duncan humbucker in there which makes it pretty versatile. I can get the early sounds I used to favour, but also the more Stratty single-coil neck pickup sound for more of a Stevie Ray Vaughan feel. It’s held up nicely, more than my Custom Shop… which is kinda crazy!”

The axeman released his debut solo album in 1990 through Shrapnel Records, after impressing founder Mike Varney - the man who discovered Yngwie Malmsteen, Richie Kotzen, Bumblefoot and many, many more game-changing guitarists.

However, unlike most of the shredders associated with the label, many of whom focused on neoclassical or fusion licks at brain-jarring speeds, Firkins kept his focus on the country and bluegrass-infused rock approach.

“I watched Albert Lee’s Starlicks video a lot early on,” he reveals.

“I couldn’t play any of it, I don’t think… maybe I could do just one of the licks nearly okay. Believe it or not, I learned a lot from Steve Howe from Yes. I would sit there learning all that fingerpicking stuff, and started picking up licks which I turned into my own licks.

“Then I got into Danny Gatton, and I started getting a few licks from a Sound Page he put out in one of the guitar magazines in 1987. There was a song called Nit Pickin’ which really inspired my playing, even though I couldn’t do it the way he could. I’m kinda glad I’m can’t play that stuff as good as those guys; I kinda did it my own way which helped a lot!”

Here, the guitarist gives his five tips for musical excellence…

1. Learn your scales in every position

“As far as scales go, my first was A minor - which I picked up around the age of 16 years old. I learned all the positions, all the way up the neck. Some of them are better than others, but I found all the notes in that scale helped me in every way.

“As rockers, we all seem to love F sharp, so I slowly but surely learned all of those positions across the neck. I started off learning all the minor scales… then I slowly figured out Mixolydian for dominant scales. I didn’t actually know what the notes were! Eventually, I started throwing in a lot of blue notes, too…

“I see a lot of guitar players that are really advanced that don’t really know the positions in different keys. It helps to know what the notes are, what they are called and why they belong in that scale. The more time you spend with them, the more you’ll be able to automatically know in a split-second what notes make up a G minor scale.”

“I see a lot of guitar players just running scales all the time. Instead of playing them slower or making a melody or rhythm, which is what motivates me, a lot of YouTube players are just blasting through. They just play scales and don’t really go anywhere with them. It’s more impressive to play a rhythm part or more rhythmic licks.

“There are so many guys playing sequences. When Greg Howe does it, I think it sounds awesome, but most players it’s all they do… and they’re not breaking up the rhythm. Some solos are just sequences in different positions, and they never seem to break out into freedom. There is a whole open field where you can play anything, and filling it with just a scale or sequence seems like a bit of a waste. I think it’s better to follow your fingers and ear to find that freedom.”

“Sometimes I’ll sit down to practise and I just won’t be in the mood. And quite often, it’s because I haven’t really listened to anything - nothing much will come out of me sitting down to play and write. I’ve gone back to finding time to listen to other players, and I think it was an important realisation.

“I try to forget all the technique and theory when I have a guitar in my hands. Rarely do I find myself having to stick to just one scale or sound. Major or minor almost doesn’t matter… especially when you’re playing in a trio. I love the blues sound, but I never really feel like I stay in pentatonic. I’m thinking of root notes or 5th notes more than pentatonic positions. I like coming up with motifs that repeat and resurface within one song.

“For example, If there’s a song with a long solo, I might come up with a few motifs at the beginning of the tour and use them to start the set most nights. Other nights, I might just close my eyes and play all the way across the neck without thinking about anything other than how I’m feeling right there and then. If it’s gonna, it’s gonna happen!

“I love the Dorian mode and I might go from that to Mixolydian… but rarely do I just stick with pentatonics. I try to think more modal and more about freedom.”

“It’s always been about economy picking for me; the only time I do double-picking is when I’m using two notes per string, but I’m not really a good bluegrass player. As for three notes per-string, it will always be economy picking. That’s just how I naturally learned it as a kid; I didn’t know it was a technique or anything. It felt right to do a downstroke when you are going in that direction. It was an accident, really!

“That’s where your triads and arpeggios really help - I’ve actually been relearning a lot of it this year. I hadn’t practised scales in a long time, but now I’m older, I realised I want to stay in shape… I don’t want to lose technique; I want to gain technique. If you’re good at something, you want to use it better, right? So, more recently, I’ve been trying to focus on raking through arpeggios, going from A minor to A diminished.”

5. Be ready to perform without practising

“It can be frustrating and scary starting a tour. I hadn’t played live for two years since starting this one. Before the set, we get half a song soundcheck and that’s it. I walk out with no practice time whatsoever. You’ll be in the van or trying to find a shower or trying to find food!

“It’s fun - there’s no stress. I’m thinking, ‘Let’s go do this!’ rather than, ‘Oh shit, how will I play this really fast opening song?’ We don’t do that… we’ll start slower and then build it up from there.

“Yesterday was brutal - we were in the van all day! Most of the drives on our European run had been really nice, but there are always moments that challenge you. You might play a show and instead of sleeping, you might have to stay up and get a plane to the next city. Sometimes you can be really fucked up and tired, yet still somehow you can end up playing your best show. Even with all that physical pain, you pick up your guitar and kick fuckin’ ass!

“For about a month after the end of a tour, you have this power to walk up to your guitar and play the most complicated things perfectly. Some might say by the end of the tour, you have almost too many chops! You might sound different to how you did at the beginning and that might be great, it might not. But what you are trying to convey shouldn’t be about technique; it should be about vibe.

“After the fifth week, the power has gone away - it comes back during the next tour. I don’t practise for hours a day at home. That was important to me earlier on; now it’s more about picking up the guitar and writing something new. If you can’t do it or continue it, then accept that’s as good as it will get - try not to be disheartened or unhappy about it and you’ll sleep good.”