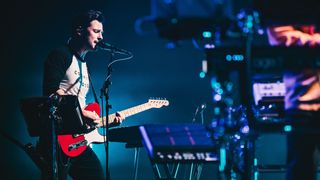 Since the death of Chester Bennington in July 2017, Mike Shinoda’s life has mainly revolved around creative therapy. By his own admission, he’s been throwing himself more into art and music than ever before, using self-expression as a way to mourn as much as heal.

It was this coping mechanism that spawned last year’s Post Traumatic solo debut and the series of paintings featured in its accompanying artbook, the catharsis helping him find light during the darkest days of his career.

While Linkin Park take some much-needed time out, their founding singer/guitarist has enlisted English multi-instrumentalist Matt Harris and one of Israel’s finest drumming talents in Dan Mayo to help bring his new sounds and textures to the stage.

Ahead of their European tour this month, Harris tells MusicRadar just how he ended up working with one of rock’s most visionary minds and why singing Chester’s parts is a huge honour that is worth every bit of the challenge it so naturally presents...

What were you doing before you met Mike Shinoda?

“Like a lot of people in the creative industries, there was a lot of that hand-to-mouth kind of work, taking whatever gigs and opportunities present themselves. By going with the flow, I’ve done so many different things. First and foremost, I do not consider myself a guitarist – I would never introduce myself to people as that. I just happen to play guitar! It was a random sequence of events...

“Being a jack of all trades was a big factor with this gig; Mike needed someone that could play lots of instruments rather than just one. I was in the music world for a long time doing my own bands, then I went into session work playing principally bass. I did different things for different artists including touring, then I moved into musical direction and becoming an MD.

“Through that I did more Ableton work, doing all the programming to figure out how to design people’s live shows and simplify things but make sure it looks interesting and entertaining on stage.”

What kind of artists did you work with?

“Well before Mike, I was working with Jack Garratt, who is a really interesting British electronic/crossover artist. I cannot recommend checking out his live videos enough, the shows are insane. He’s like a one-man band and plays drums with one hand better than I can with my entire body. He wanted a live setup where could play different things and loop them, jumping from one instrument to another seamlessly...

“It turned out that Mike and a lot of the Linkin Park guys were big fans of what he was doing, which is how I ended up on Mike’s radar. I was introduced to him as the guy that helped with Jack’s live setup. I met Mike for the first time last summer and then met the other Linkin Park guys along the way. Me and Mike started talking about the tour and hung out in London when he was doing press in London for the Post Traumatic release. The next time I saw Mike was in Hong Kong, the day before the first show of the tour!”

Not only are Chester’s parts challenging to sing, but there must also have been extra pressure in being respectful, careful even, with his legacy...

“Yeah, I think you put it really well by saying there’s a lot of context to be aware of and respectful of… and, sometimes, careful. Linkin Park fans are some of the most dedicated fans in the world. With everything that’s happened over the last two years, and the journey Mike has been on, anyone new stepping into that world would have reason to tread carefully.

“As an example, there were times when we were touring with Mike and he wanted to talk to myself and the drummer Dan Mayo - it’s only three of us on stage - about any new songs we felt should be worked into the set. A bit later he asked me to sing one of Chester’s songs solo, maybe one of the ones he can’t do, but I have the range to do...”

How did you end up deciding on Sharp Edges?

“It was such an incredible honour to be asked but also a heavy decision, so I told him I felt he should pick the song because I don’t have the same knowledge and context of the fans’ relationship with the music. I really wanted him to help guide me, so he gave me a list of about five tracks and I went with Sharp Edges because it felt comfortable for me to perform on my own without Mike. The first time was such an intense and unreal experience!”

What are the biggest challenges in the set to sing?

“Obviously it’s not so much about competing with Chester’s range, that’s never the goal, but in my mind the challenge is doing it justice. The fans will come with certain expectations and ideas of what the show will entail, maybe even an idea of things they are okay and not okay with. Some fans may not particularly like me singing some of Chester’s parts, so I’m trying to be on the same side as them rather than feel there’s any kind of tension.

“His melodies can be very hard. If I don’t warm up properly, I know I will struggle on a song like Iridescent, which has some big vocal leads in the chorus. When They Come For Me is another one, even though the chorus is just an ‘Aaaah’ I know that I won’t hit it right without warming up before. And then whenever Sharp Edges is in the set, I know I have to do my homework - there are some belting high notes to get to.”

How exactly do you warm up and do you have any tips for anyone else out there trying to increase their range?

“For vocal warm-ups, Mike and I actually do it together before every show. He has a recording on his phone that we sing along to, doing different exercises before hitting the stage. Another thing that’s equally as important is breathing exercises and learning how to use your diaphragm.

“I don’t think I qualify as someone that should give out advice, but here’s a few things that I do that seem to work for me. I used to have a vocal coach when I first started trying to learn how to use my voice and it’s well worth paying someone to sit with you. You can practice on your own, even watch YouTube videos, but it’s not the same as someone listening to you alone and helping address the things you don’t get quite right.”

As strange as it sounds, was there an aspect of mentally warming up to – even if just for that first live show?

“This gig involves big stages and singing someone else’s iconic parts to an audience that already know them and love the way it was done before… which is quite nerve-wracking. I had to learn how to relax my mind and body and not get tensed up. As soon as you feel like that, you are already on the backfoot. You need that out of your system.

“So before that first gig, I was doing all sorts of weird relaxation things, as well as bending exercises on the floor trying to stretch out any tension within. Mike probably thought I was a total weirdo, haha! But if you get a gig like this and someone is paying you to do your job as best you can, it doesn’t matter if you look a bit stupid beforehand! Getting rid of all tension is as much of a session player’s job as knowing scales or knowing how to shred.”

What have you learned about Linkin Park’s creative process through working with Mike?

“I don’t know if I necessarily have a good answer… with Chester, I’m totally in the fan zone. But I’ve learned a lot from working with Mike as a writer, producer and leader. A big thing about Chester’s iconic melodies is just how simple they are, even like the one-note melodies like the chorus of Numb. It’s simple, but God it’s good!

“They knew exactly how to find a melody that blended perfectly within the music, it was always very cohesive and comes together as one. It never feels like individual parts of a song. There are a lot of different writers in Linkin Park and there’s a lot of collaboration.”

You also play guitar and bass in the band. What kind of equipment are you using?

“Coming into this gig was a completely new experience for me for gear, too. We don’t use any onstage amps; both Mike and I have our own Axe-Fx rigs. I’d never used them before. The cool thing was that Mike would turn up with these two boxes that had the exact sounds from the Linkin Park albums! It was like being handed Brad’s tone either exactly as recorded or tweaked slightly for live shows. ‘Here you go, this one is Papercut!’ That was very surreal but super-enjoyable.

“There are a few guitars out with me; some are mine, some Strats are Mike’s and I think some belong to Linkin Park. I might actually have one of Brad’s old PRS axes - that’s what I’ll use on Papercut unless we have the B-rig and I use an SG. Then for the Post Traumatic stuff I’ve been using a couple of Fenders and a D’Angelico. There’s a California Series Tele that has a five-way selector switch and a humbucker, so it’s a bit of a crossover into the Strat world. That’s one of my favourite guitars, I’ve had it for a long time.

“All I’ve got on my riser is two tuners, which are partly used for muting when I change guitars. There’s one for my guitar rig and another for my bass rig. I use a Tech 21 Sans Amp for my bass sound, with a ‘77 P-Bass that has the perfect bass sound in my head. That combination sounds wicked every time.”

Finally, for those who have never met Mike, what can be said of the man behind the music?

“It’s almost hard to express! He has no ego about him… if you didn’t know who he was and met him, you would never guess he is a multi-platinum selling artist. There’s no pretence and he’s very giving and open-minded as a creator, a genuine inspiration as a musician and human being...

“He’s endlessly creative as well, it’s non-stop. While we’re on the tourbus, he’ll be working on Ableton for fun, as well as doing artwork. The dude is relentless, a real work machine. But he loves what he does, so he’s always got a smile on his face. The day-to-day reality of being around him is that it’s super-easy and he’s like your buddy.

“The flipside is all in my head, working with someone I’ve been listening to for 20 years! When Hybrid Theory came out, I was a teenager and that album was everything to me. I loved it beyond anything!”