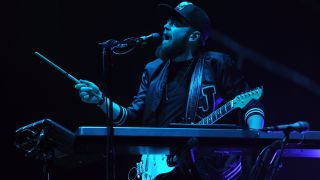 Jack Garratt: "I couldn't accurately represent myself with just my guitar, so I had to come up with a way that I could do the shows and not stress about getting a band together." (Image credit: Visionhaus/Corbis)

There aren't many aspiring musicians in the UK today that wouldn't trade an essential organ to be in Jack Garratt's position.

The singer-songwriter from Buckinghamshire has recently completed a stint as main support on Mumford & Sons' arena mega tour, scooped the Brits Critics' Choice award and secured the BBC's much-vaunted Sound Of 2016 nod.

Armed with a mind-boggling array of gear he dubs "the desk of weirdness", the 21st century one-man band uses loops, beats, keyboards and guitar to construct a forward-thinking trip-hopping take on indie R&B. As you can tell, he's pretty hard to pigeon hole…

Now, ahead of the release of his debut album Phase on 19 February, we ask Garratt to cast his mind back to his youth, before he picked up the guitar, drum sticks and keyboard all at once, and explain how his singular artistic vision came to be.

What was the first record you heard that flicked that switch in your head and made you think about music?

"I remember listening to Songs In The Key Of Life as a kid. Stevie Wonder has an ability to manipulate pop into something globally obtainable. Anyone can listen and enjoy it, because there's something for everyone. That woke me up to the possibilities of pop music.

"I was a huge pop music fan as a kid, but the bands I was into were like 5ive and N-Sync. It was like watching a cartoon. There was so much going on and the production was so well mixed. Stevie Wonder was able to give you those melodies and production, but back it up with such creative integrity and real musicianship and artistry.

"There's a stigma attached to pop music, like it's a taboo word. It used to make my skin crawl when people said it and I'd say, 'I'm not a pop star! I want to be a respected musician!' But I think people have changed the way they think about it. 30 years ago, pop music was great. It was Stevie Wonder and Michael Jackson and some of the greatest singers that have ever lived.

"[Take Motown, for instance] they were still manufacturing talent to make money, which is a thing that happens, but the difference is that in the last 20 years the importance of talent came second to the necessity to make money. Then the product is the last thing people think about, but it's the first thing they see. And that's such a weird way to run it."

You play live as a one-man act. Why did you make that decision?

"Well, I had gigs coming up and I couldn't accurately represent myself with just my guitar, so I had to come up with a way that I could do the shows and not stress about getting a band together. I knew I could play more than one thing at once. I knew I'd be able to play bass and drums at the same time, and I thought, 'Now if I can play piano on top of that and have a guitar - perfect. And I'll just sing over everything!' That was literally the process in my head, but then when I started to do the shows, I came to realise that apparently that's not normal!"

What gear do you use to make that happen then?

"First I have a keyboard, a laptop and a pad controller - an Akai LPD8, because I saw Ryan Lott from Son Lux use one. Then I picked up Ableton because someone suggested that was what I was looking for. I only really use it as a loop section and I have it on my keyboard and my LPD8.

"The LPD8 has all my effects sounds and controls what I want to manipulate from the keyboard and then the pads are just loop triggers - my starts, my stops and my samples.

"Then my keyboard is split up into three different sections. I've got one octave at the bottom which is a big vibrating, disgusting, sick sawtooth synth sound, then a sub-bass sound for a couple of octaves above that and then the rest of the keyboard is piano. All of the samples and sounds I'm using are from Ableton. I haven't had the time to re-do anything, so I'm still essentially using the same rig that I first put together, but it sounds great. So that's everything on my left hand!"

And on the right hand?

"On my right had I've got my Roland SPD-SX [percussion sampling pad], of which I've gone through about six, because apparently I don't play them correctly and then they break a lot. It's an incredible bit of kit and really necessary for what I do.

"All of my audio for that is stored in the machine, not on Ableton. I feel like an old man when I'm uploading that. I'm building a new set at the moment for the album and I'm on page 50, so that's how many different drum samples I've got in there. All my foot pedals, all my hi-hats in their variations, all my snares and then preset loops from my productions that I trigger manually. Everything is done by my hands and nothing is done by click, so I have to be in time or nothing is in time."

What about your guitar setup?

"My guitar setup is inspired by Stevie Ray Vaughan. I learnt all of my licks and how to feel when playing the guitar through him, so I've just switched to this American Strat that Fender very, very kindly put together and made for me. Then that's going through an Ibanez Tubescreamer and then I've got my Boss Super Octave OC-3, which I use for a couple of songs when I can't put my hand on the sub on the keyboard and the guitar at the same time.

"Then I added the Moog MiniFooger Drive pedal, which never sounds the same twice and is absolutely crazy. That all runs through an Electro-Harmonix Hum Debugger, but I've come to notice recently that it delays the signal by like a millisecond and creates this really weird slap-back effect. It's the first thing in my guitar rig and I've just really come to love it, this happy little accident. And then that all runs through an Orange 50-watt Rockerverb."

Do you approach the writing process through that rig, or do you make everything on the laptop and then take it to the rig and think, 'How the hell am I going to do this?'

"I find the best approach is the latter! I always record, finish, mix and master first. Then I take all the samples and stems that I need and chop them up and stick them onto the pads. The pads have become the brain and if that's not right, nothing else will be. The piano and the sub are always the same, so what makes each song different is what I do with the drum pads."

It's a lot to think about live. Do you ever find the concentration element stunts the emotional element?

"It can be overwhelming. I create the issues in my head and get overwhelmed by the situation, because I'm doing a lot and it's a lot of work. But people are entertained by it and that's part of my job as an artist. I think the best thing to do when I walk on stage is blackout. I let my mind talk to my body and if I get in the way of that conversation shit starts to go wrong!"

Do you miss having someone to walk off stage with and high five after those big shows?

"I'm honestly never more depressed than in those moments! All you want to do is go, 'Oh my God that show was great! Do you remember that one bit?' etc. Instead I walk into my dressing room and there's literally no one there. But my family is my crew and there's a real feeling that we're all in it together. If I'm up behind my desk of weirdness and something goes wrong… Like, I have two drum sticks and I need instant access to them, so they just sit on my keyboard, but there have been times when they've fallen on the floor and if my stage tech didn't notice, then I'd be totally screwed for the remainder of the song, but that's just never happened. They're always on point.

"My monitor engineer is an absolute genius, he built me this 'shout' system, so I have a pedal that I can click and it turns off the signal to front of house and goes straight to him. I can be halfway through a song, doing 27 things at once, and just push a button and scream 'drum stick!' before I go into the next part. On other occasions, because I don't want it to be obvious, I've had to put that button on and burp loudly into the microphone. It's a very useful bit of kit!"

Finally, you've had the Mumford tour, the Brits Critics' Choice nod and the BBC Sound Of 2016. The world is your oyster. What are you planning to do with that platform? Are you going to go full Bono?

"Haha! Well, I've already bought the sunglasses! These accolades when they come, it's just a very, very strange thing. I love the feeling that I've been validated by a group of my peers or people 'in the know', so to come out as someone those people think is worth keeping an eye on is an incredible compliment. But if I see it as anything more than a compliment, I'm going against the thing that I believe in. Music isn't a competition. I just hope that I can take this opportunity and make the most of it, not just for myself, but also for the people that have supported me."