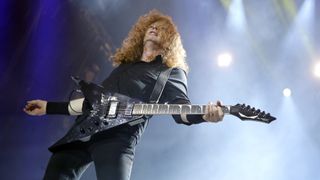 If you were looking to buy one of Dave Mustaine’s Dean signature and prototype guitars in his huge gear sale on Reverb last week, and your name wasn’t Keith Gannon, you were probably out of luck. The British recording studio owner managed to get all but two of around 20 Dean guitars from the thrash metal legend’s personal collection. But why?

The US-born and now UK-based Gannon must have heard us as he’s explained himself in a lengthy YouTube video explaining how and why he purchased them from the official Dave Mustaine Reverb shop.

They could certainly be seen as a savvy investment as many of the guitars sold for under £1,000 with the priciest being a Zero Korina fetching £3,455. Indeed, even in the video Gannon alludes to being open to selling at least some of the guitars again in the future.

While he’s well within his rights to do so if he decides, Gannon also addresses some of the negative reactions he’s seen online from disgruntled fans (and there are many on YouTube) who missed out on buying one of Mustaine’s Deans. And others who seem especially angered by the idea of the guitars being sold on by Gannon at a profit.

But we can’t help wondering why Mustaine felt the time was right to offload so many Dean guitars from his personal collection in the first place. After all, he sold off a number of his Jackson guitars when he signed on with Dean.

Could there be a new signature deal on the horizon for the Megadeth man? We’re keeping our inquisitive snouts to the ground.